Zenos Paradoxes – The motionless runner & Achilles and the Tortoise

Zeno of Elea was a Greek philosopher and mathematician, whom Aristotle called the inventor of dialect. He is especially known for his paradoxes that contributed to the development of logic. 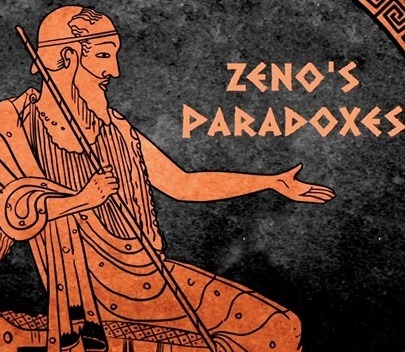 A runner wants to run a certain distance, for example 500 meters. But if he wants to reach that distance he must first reach the first 250 meters, and to reach that he must first run 125 meters. Since space is infinitely divisible, we can repeat that forever. Thus, the runner has to reach an infinite number of midpoints in a finite time which is impossible. This leads us to thinking that anyone who wants to move from one point to another must meet these requirements, and so motion is impossible, and what we perceive as motion is an illusion.

One assumption in this paradox is that space is infinitely divisible. Another is that it is impossible to reach infinite number of points in a finite time. But why time couldn’t be infinitely divided to?

Achilles and the tortoise

Let’s say that, for some reason, Achilles and the tortoise are racing. The tortoise, if of course a lot slower that the Achilles and for that reason she has a 100 meters head start. 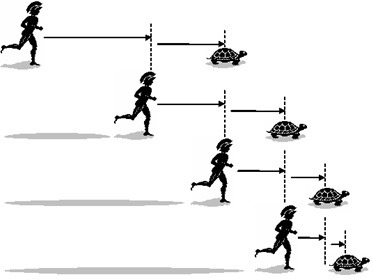 So how can an infinite process end?

If we have the distance of 2 meters and we’re constantly dividing it by two we get:

This is a well behaved sum. At infinity it is equal to a real number exactly. But when we’re talking about infinity, we know that it doesn’t have the last step. So how can something without a last step be completed? That is the paradox. But even though this is an infinite process, it can be completed. This is the same problem as drawing a length of an irrational number. How can you draw accurately segment whose length has infinitely many decimals? But for example, if you have a right triangle with length of both of its legs 1, its hypotenuse will be $\sqrt{2}$, which is an irrational number.