The Montreal Cognitive Assessment (MoCA) was designed by Dr. Ziad Nasreddine in Montreal, Canada in the year 1996. This assessment method was authenticated and legalized to diagnose slight cognitive impairment in people.

Since then, the (MoCA) has been widely regarded. Professionals administer this test around the world. They consider it a very effective method to assess mild cognitive impairment.

The MoCA consists of a 30-point test. It is usually spread around 10 minutes.

If you are a clinician, you can get access to the instructions associated with the MoCA on the internet.

Though the original test is in English, it can be adjusted for people who speak other languages.

Questions to Ask the School Before the CogAT Test

Should I Let My Child Take the CogAT Test

Naglieri Nonverbal Ability Test ~ What to Know About NNAT

What Happens in a MoCA?

It assesses the person’s quick memory function which involves the patient learning five nouns in separate intervals and then the patient is asked to recall what he has learned (5 points for this).

It assesses a patient’s Visuospatial abilities and involves clock drawing and a cube which is in 3D.

The MoCA also analyses a patient’s executive function which directly relates to our working memory.

If someone has trouble connecting his experiences from the past to the present and has trouble making decisions, planning, paying attention, managing time and or organizing his life then he is suffering from a loss in executive function which is a part of cognitive impairment.

The patient’s motor skills, working memory, concentration and his attention to instructions given are also evaluated by using different attention tasks.

Various tests like three item confrontation in which you have to name three unfamiliar animals for example a rhinoceros, camel and a bison  (3 points).

Another test engages the test taker in speaking complexly arranged sentences (2 points are given for this).

Lastly, it assesses the patient’s ability to successfully determine the time and date she/he is in.

What is a normal MoCA score?

The range for MoCA scores is from 0 – 30. A score is considered to be normal when it’s 26 or higher.

If you are interested in MoCA results and scoring, there is a scale between 0 and 30.

People who score 26 or higher are generally considered to be functioning normally.

Research done be clinicians using the Montreal Cognitive Assessment have concluded that people who succeeded in the assessment usually scored over 27 in comparison to those who score 22.1 .

Which means they may be suffering from a milder form of cognitive imbalance.

Those who scored 16.2 may be likely to have Alzheimer’s.

Is the MoCA convenient?

The Montreal Cognitive Assessment is a relatively convenient procedure which allows medical professionals to accurately and quickly determine whether or not someone is suffering from a considerable imbalance of cognitive function.

The MoCA determines whether or not a person requires extensive treatment in case of Alzheimer’s disease.

Also, the MoCA determines certain symptoms and allows doctors to keep such a situation from worsening.

Doctors who use the MoCA to assess patients are allowed to evaluate whether a person has dementia as a result of mild cognitive impairment.

And the sole reason they can do this is because the MoCA involves evaluating a person’s executive function (as explained above).

Overview of the Pros and Cons of MoCA 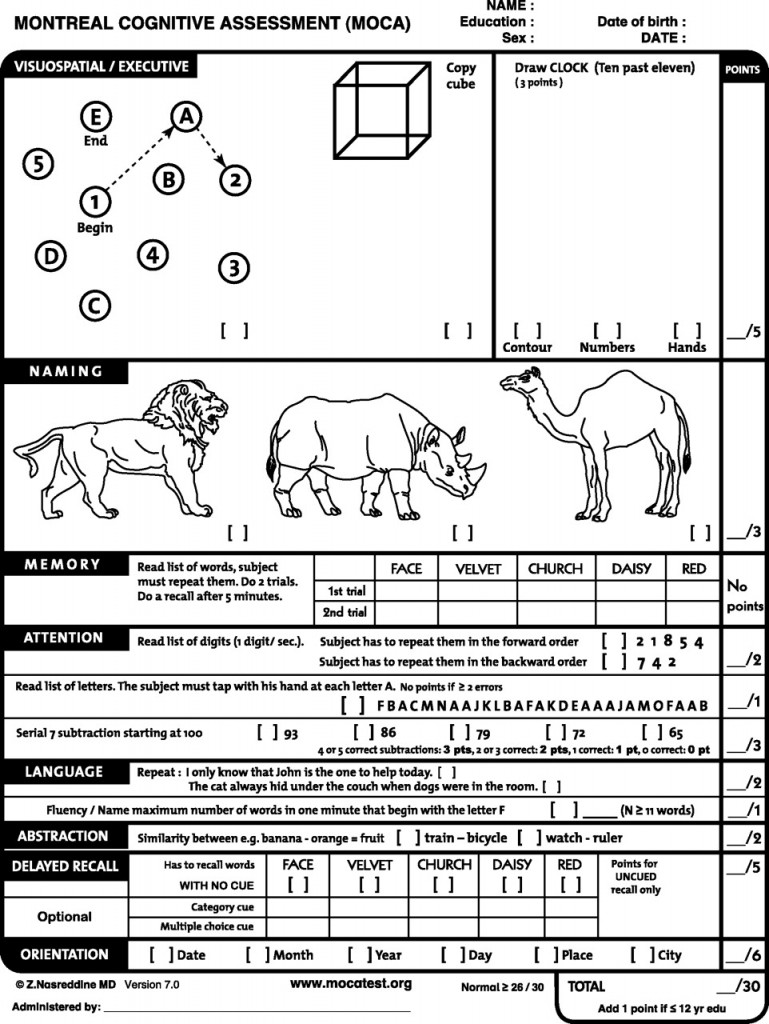 Advantages of the MoCA

Some of the major advantages of the Montreal cognitive assessment include simplicity, easy for the patient, reliable outcome and the screening process involved to determine whether or not a person has Alzheimer’s disease.

Furthermore, the MoCA also measures the various hints of dementia present in a person. The Mini-Mental State Exam (MMSE) does not measure the components of dementia.

The MoCA also works well to determine symptoms for Parkinson’s disease. Unlike the MMSE test, the MoCA is free to use, involving no payments.

Disadvantages of the MoCA

There is one potential drawback. It’s important for clinicians to administer the Montreal cognitive assessment in memory clinic settings. In this way, they can ensure accurate results.

According to Assistant clinical professor at UCSD and the author of a study on the application of MoCA, in comparison to MMSE, Dr. Stephanie Lessig the MoCA is newer to the scene and originally just looked at patients with milder forms of Alzheimer’s.

The MoCA has since gone on to become useful for assessing additional diseases.

It seems to be a little better at looking in depth at some of the deficits that the MMSE might not pick up.

For instance, the MMSE has a heavy language component, but that’s not an area that tends to be as much a deficit in the early stages of conditions like Parkinson’s or other forms of dementia, so that’s where the MoCA comes in at being a little more sensitive.

According to a study made by Stephanie Lessig, the MoCA successfully manages to point out subtle insufficiency in cognitive behavior with the patients suffering from Parkinson’s disease.

This is not the case with the MMSE. However, many prefer to use the MMSE.

Professionals regard MoCA as a very useful tool in recognizing certain abnormalities in cognitive behavior under normal circumstances. However, with patients who have severe dementia or cognitive impairment, studies have proven it doesn’t work as effectively.

The idea of being examined through the Montreal cognitive assessment — or any other assessment for that matter — can be stressful and may discourage slightly older people.

There are risks of test takers to panic and become confused before an assessment. These factors can skew results.

This anxiety may lead to poor performance on the MoCA. Therefore, it is important to take this test confidently in order to get accurate results.