The definition and basics of a circle 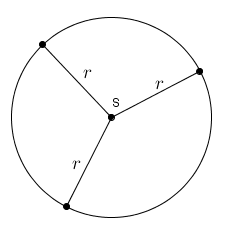 A chord is the line segment in which the ends are two different points that lie on the circumference of a circle. A chord is denoted by $c$. 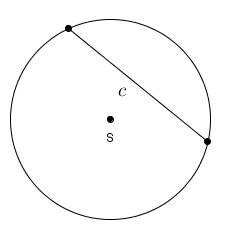 The longest chord is called the diameter. A diameter contains the center of the circle. The length of a diameter is equal to $2r.$ A diameter is denoted by $R$. 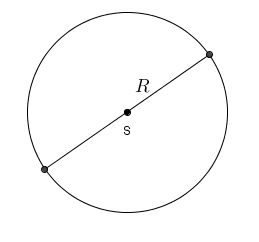 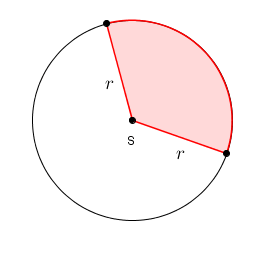 A segment is a part of a circle enclosed by a chord and a part of the circumference. 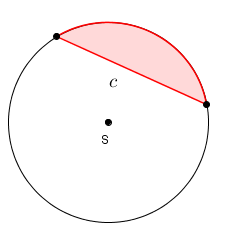 A secant and tangent to the circle 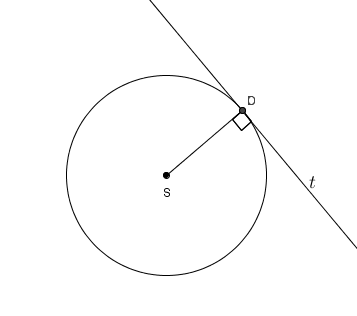 Concentric circles have the same center but different radius. 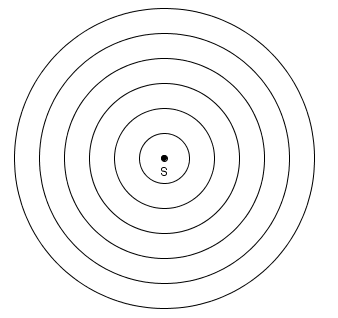 If $r$ is the length of the circle, then its circumference is given with the formula:


From this we can see that the number $\pi$ is defined as the ration of the length of circumference and its diameter.

Length of the arc and area of a sector

Firstly, consider circle on which lie two different points $A$ and $B$. Those points divide it in two different arcs. Their union is the whole circle. 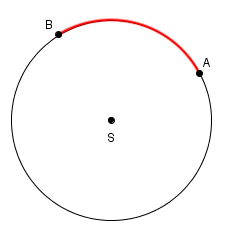 For denoting arcs we must refer to the positive direction – in an anticlockwise motion.

We can draw an angle whose axis is the center of the circle and whose legs intersect the circle at points $A$ and $B$. This angle formed is called the central angle. 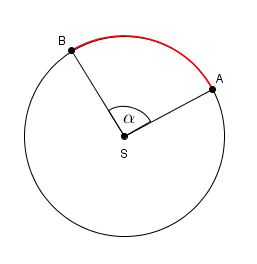 A whole circle has a circumference of $ 360^{\circ}$. This means that we can make the following ratio:

where $l$ is length of the arc.

If the central angle has $\alpha$ degrees; than the length of the arc is $\alpha$ times greater than the arc that matches the $ 1^{\circ}$ angle:

In a similar way we can find the formula for the area of a sector:

Every angle whose vertex is a point on the circle and whose legs intersect the circle is called an inscribed angle.

For these two points we can also define another angle whose legs also run through those points, but its vertex is placed in the center. This is called the central angle.

The central and inscribed angle theorem 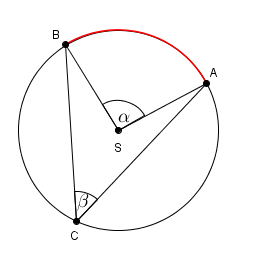 Proof. There are exactly three different cases that may appear.

1.) The center of the circle lies on one leg of the inscribed angle. 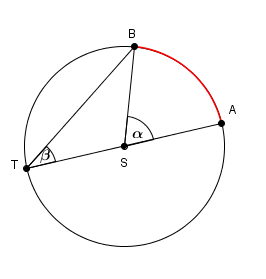 In this case we can observe triangle $TSB$. We have:

2.) The center of the circle lies within inscribed angle. 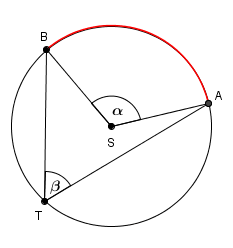 First of all, determine point $C$ in the arc $\widehat{AB}$ which is diametrically opposite of point $T$. We then apply case 1.) on inscribed angles $\angle{ATS}$ and $\angle{BTS}$: 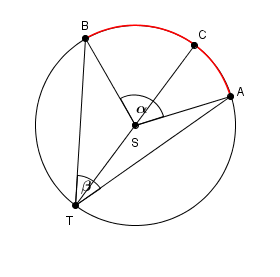 3.) The center lies outside of the inscribed circle. 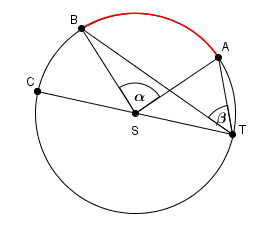 .When we subtract  these two equations we get: 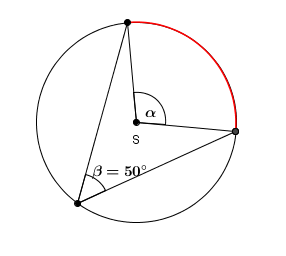 Every inscribed angle over diameter of the circle is the right angle.

First, draw a circle and a triangle whose one side is the diameter and whose vertex is any point $C$ on the circle different from $A$ and $B$.

Draw a segment line that connects point $C$ and the center of the circle $S$. 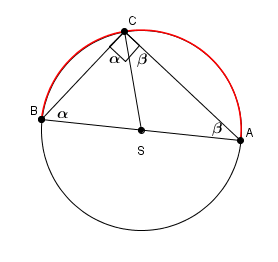 For the same reason triangle $ASC$ is an isosceles triangle and $\angle SAC = \angle SCA = \beta$.

Center of the circumscribed circle of right triangle is located in the middle of hypotenuse. 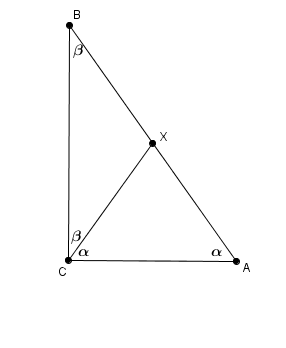 This means that $X$ is the center of the circumscribed circle and the middle point of the hypotenuse.

Equation of a circle

Every curve has an equation. From this equation we can find all the  information we require to draw the curve and know each one of its properties.

A circle’s equation can be derived from its definition.

Let’s say that the coordinate of the circles center is $S(p, q)$ and any point $T$ on the circumference of a circle has the coordinate $T(x, y)$. From the formula for the distance of two points and the fact that we know that the distance is equal to the length of the radius $r$ we get that: 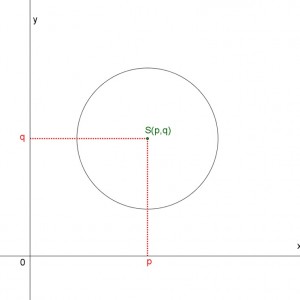 What if we put the center of the circle in origin and set the radius of $1$? We get a unit circle.

Example 2. Draw a circle that is described by the following equation: 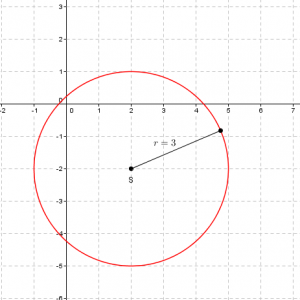 The mutual position of  a line and a circle

A line and the circle can be in three positions:
1. Two different points – line is the secant of the circle. 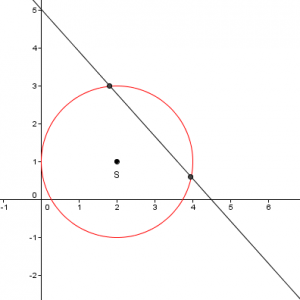 2. One point in common – line is a tangent to the circle. 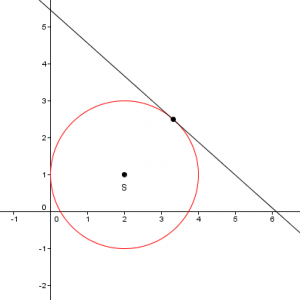 3. No points in common 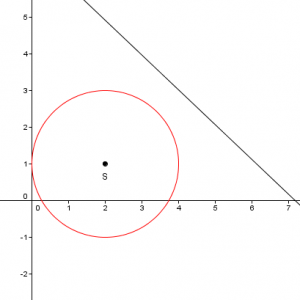 How can you find out in which relation are the circle and the line without having to draw them? You can do that using their equations.

First, from the line equation we extract $y$ or $x$. in this example we will extract $y$:

And then insert this $y$ into the equation.

Power of the point considering circle

A tangent and normal to the circle

First thing we have to do is convert this equation to a form we are used to:

From the equation of a circle we can see that the center of the circle is located in point $S( -4, 3)$.

Points $S$ and $T$ determine a normal to the circle, so we get that