Mathematics is known for its certainty. If we add $2$ and $2$, we’re always going to get $4$. If we multiply $3$ and $4$ we always get $12$. These things are certain and they will never change. However, in real life, sometimes we have situations that are not certain. Their possible outcome changes each time we repeat the action. A popular way of making a decision is flipping a coin.  If we flip a coin, we don’t know if we’re going to get heads or tails. If we play a board game and roll a die, we can’t be certain which number we’re going to get.

The branch of mathematics that specifies in events where we have no guaranteed certainty is called probability.

Probability of event is a value that tells us how likely something is to happen. Instead of “probability” of an event we can also use “odds” or “chances” of an event, which mean the same thing.

For better understanding of probability, we’ll introduce a probability line.

The probability of an event occurring is somewhere between impossible and certain. Translated to mathematics’ language, $0$ represents an impossible event, and  $1$ represents certain event. An event can’t be less likely than impossible, and more likely than certain.
In addition to writing probability as fractions, we can also write them as decimals or percentages since it’s easy to convert between them.

However, it is important to remember that probability doesn’t tell us what will happen for certain, just what will happen on average. It means that the more trials you do, the closer you get to expected probability. For example, if we flip a coin $10$, it doesn’t mean $50\%$ of it will always be heads and $50\%$ will be tails. In fact, results may be way off, we could get $2$ heads and $8$ tails. However, the more we repeat the process the closer the outcome will get to its expected probability.

When rolling a die, there are $6$ values we can get, ${1, 2, 3, 4, 5, 6}$. Those are $6$ possible outcomes and they are all equally likely to happen. It is certain we’ll get one of these numbers, but since we have $6$ possibilities, we have to divide the value of certainty among all the possibilities. We have to divide $1$ since it represents certain event by $6$. In conclusion, the probability of each event equals $\frac{1}{6}$.

That’s not a coincidence. If we add up probabilities of all possible outcomes of an event we get $1$ or $100\%$. That’s because it is certain at least one of the possible outcomes will happen, i.e. the event will occur.

These two examples are enough to see a pattern. In general, we calculate probability by dividing the number of ways it can happen by the total number of possible outcomes. 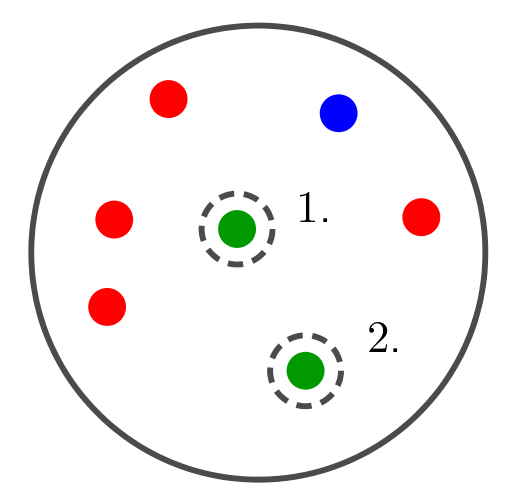 Let $A$ be event: we picked green marble.
Number of ways we can pick green marble is $2$, since we have $2$ outcomes that give us what we want. We can pick one or the other, it’s not important which. Total number of possible outcomes is $7$ since we have $7$ marbles in a bag and every single one can be picked.
By using the formula above, we have $$\displaystyle{P(A)=\frac{2}{7}}$$

Example. When rolling a die, what are the odds of getting an even number?

As we said earlier, the probability of all possible events must be equal $1$. Since event and its complement make all possible outcomes, we have $$P(A)+P(A^{c})=1$$

Sometimes it’s easier to calculate the probability of a complement, than the actual event. Well see that in next example.

Example. Let’s roll two dice. What are the odds of getting different numbers?

Example. A single card is chosen from a standard deck of $52$ playing cards. What is the probability of choosing a card that is not a king?

Now we can calculate the probability of $A^{c}$ using the formula above.