A polygon is a part of a plane enclosed by  line segments that intersect at their endpoints. 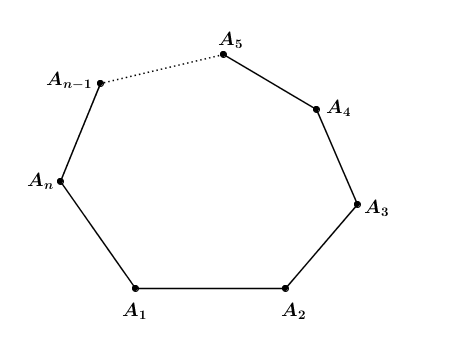 A polygon with $n$ sides and $n$ vertices is called $n$-sided polygon.

Polygons may be a convex set, however, not every polygon is a convex set. We can distinguish between convex and concave polygons.

A concave polygon is a polygon that has at least one interior angle whose measure is greater than $180^{\circ}$: 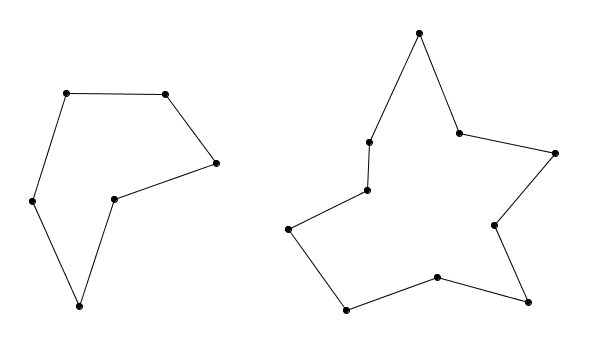 A convex polygon is a polygon in which everyinterior angle has a measure less than  $180^{\circ}$.

In this lesson, we will observe only convex polygons.

A diagonal of a polygon is a segment line in which the ends are non-adjacent vertices of a polygon.

How many diagonals does n-polygon have? Let’s see for the first few polygons.

For $n=3$ we have a triangle. We can see triangle has no diagonals because each vertex has only adjacent vertices.

Since $n$ was a lower number we could easily draw the diagonals of $n$-polygons and then count them.

Let’s say that polygon has $n$ vertices. From any vertex we can draw $n – 3$ diagonals and do that $n$ times (from any vertex) since we can’t draw from that vertex and two adjacent’s. Every two diagonals overlap and because we don’t want to count each diagonal twice , we have to divide that number with two. Final formula is: 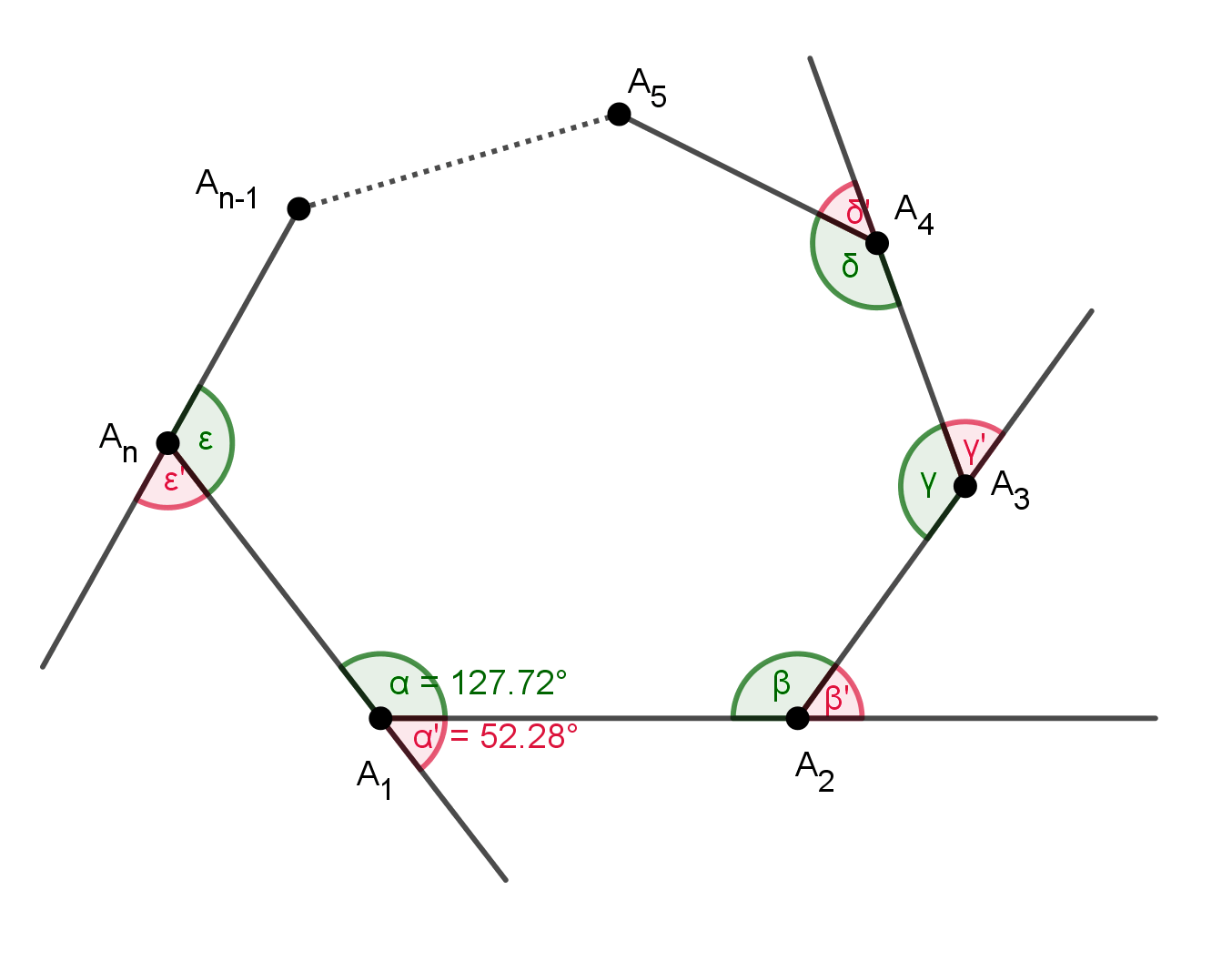 An exterior angle of a polygon is an adjacent interior angle, colored red on picture. Interior and exterior angles are supplementary angles, meaning that the sum of their measures is equal to $180^{\circ}.$

How can we determine what are the sum of the measures of all interior angles?

We will use a pentagon for example, however, we can use the same process for every other polygon. 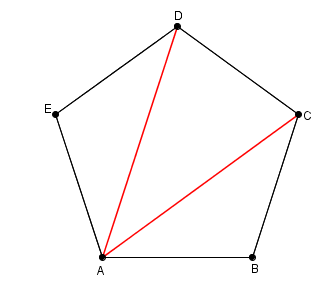 By incomplete induction we can therefore conclude that the formula for the sum of the measures of all interior angles of a convex polygon of $n$ vertices is equal to:

A regular polygon is a polygon that has all sides of equal length and all interior angles of equal measure.

An irregular polygon is a polygon that has at least one set of unequal sides.

Center of a polygon is a point inside a regular polygon that is equidistant from each vertex.

How do we find it?

In some regular polygons, the center of polygon is intersection of diagonals. For example in quadrilaterals and hexagons.

However, that’s not the case with all the polygons. We will find universal strategy for finding the center.

Let’s use a pentagon for example.

We will try to find the center by bisecting the angles. By doing this we obtain $5$ triangles. These triangles are called characteristic triangles of regular polygon. 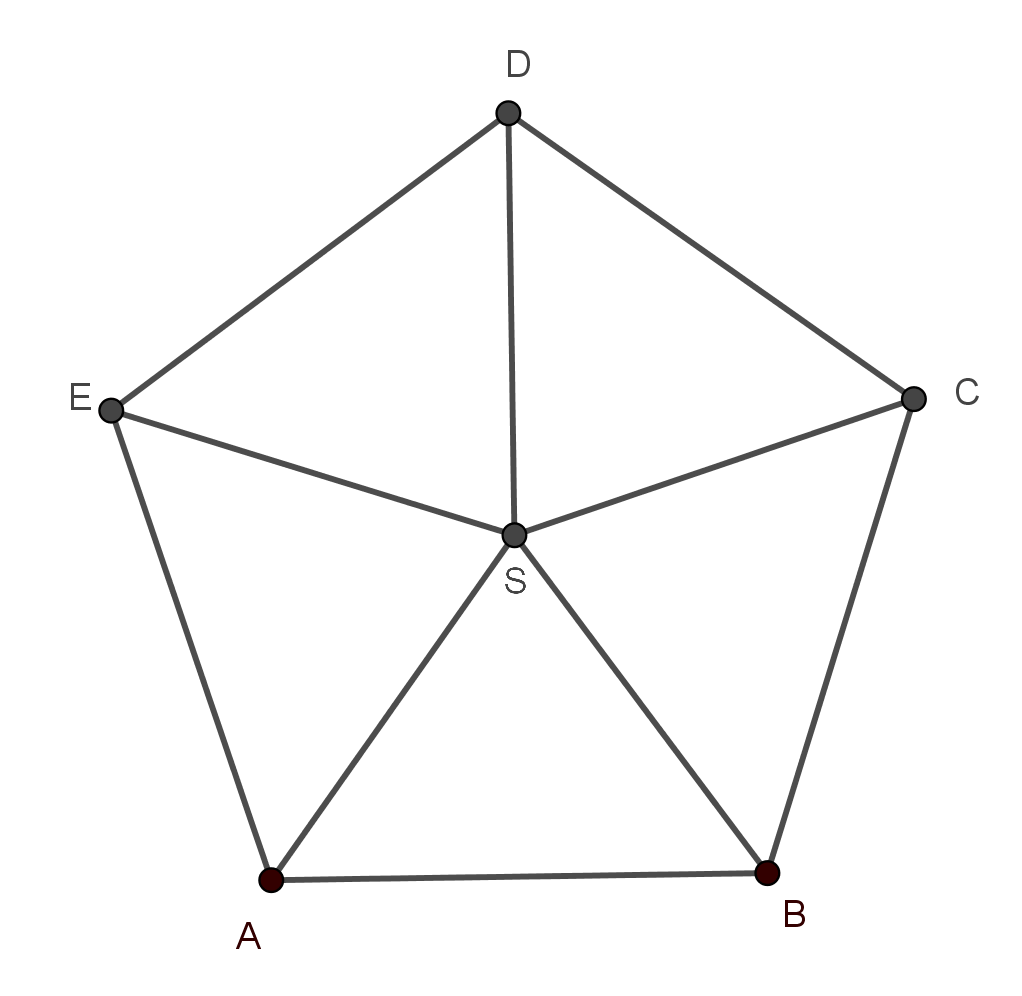 These $5$ tringles are congruent. Since this is a regular polygon, all sides have equal lengths and interior angles have equal measures. Therefore, angle bisectors give us the same angles in triangles.

The triangles we got by dividing our $n$-sided regular polygons will also be useful for finding its area.

Once again, let’s take pentagon as an example. 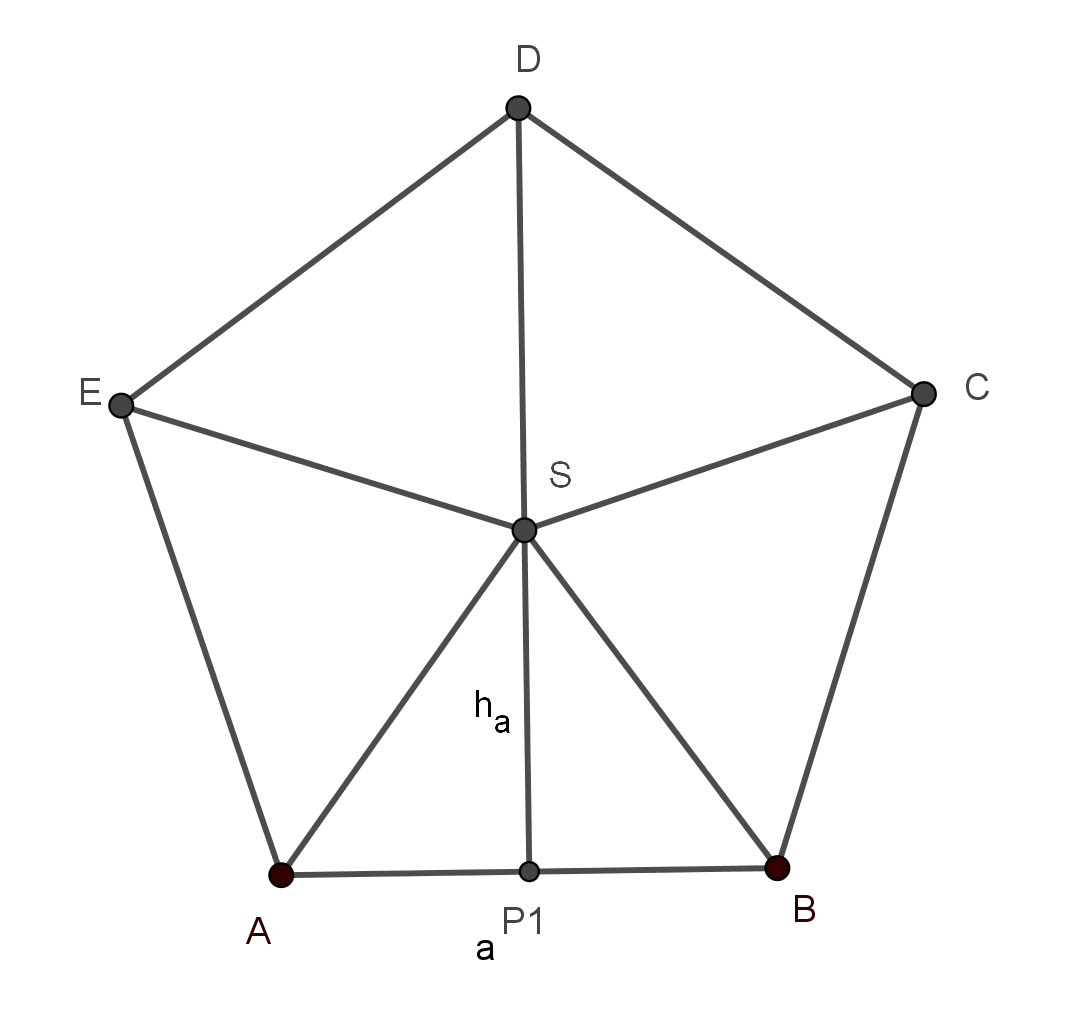 $h_a$ is also called apothem of a regular polygon.

Using the area of characteristic triangle we can get the area of a regular pentagon. It will be $ A_p = 5\cdot P_t$.

In general, the area of a regular polygon with $n$ vertices is equal to:

Quadrilaterals are polygons in a plane with $4$ sides and $4$ vertices. 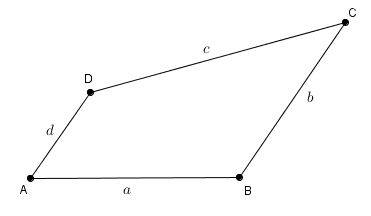 A regular quadrilateral is a square, because square is the only quadrilateral with all sides of equal length and all angles of equal measure. The area of a square is equal to the square of the length of one side, and the perimeter to four lengths of any side. Each interior angle has a measure equal to $90^{\circ}$, and their sum is equal to $360^{\circ}$. It has two diagonals. These diagonals intersect at one point which is the center of an inscribed and circumscribed circle. 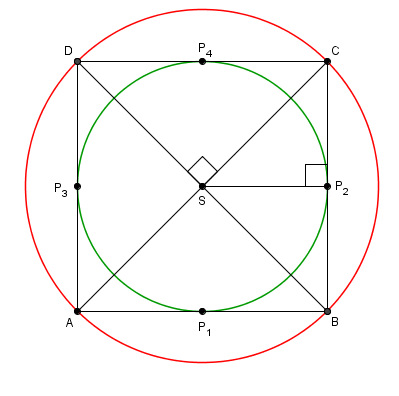 To draw an inscribed circle, we must first find the radius. To find the radius, we must draw a perpendicular line from the center to any side. When we inscribe the circle, it must touch all sides of the square. 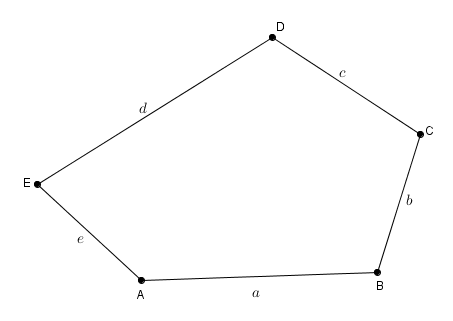 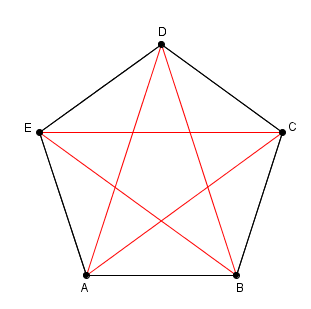 How many diagonals does pentagon have?

We can use the formula from above.

What’s the sum of the measures of all interior angles?

What is the measure of each angle in a regular polygon?

Since all regular polygons have all angles of equal measure, to obtain to the measure of each angle in a polygon with $n$ vertices we can simply divide the sum of the measures of all interior angles by $n$. 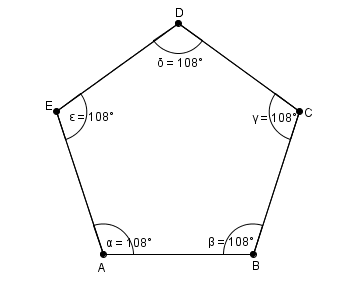 As we already noticed, diagonals in a regular polygon do not intersect at one point. To draw an  inscribed and circumscribed circle we need to find their center by the process we described before – by bisecting the angles. Through doing this we obtained five congruent triangles. 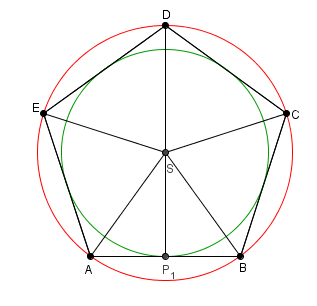 Area of pentagon is

Let’s observe a $\bigtriangleup P_1BS$. This triangle is a right angled triangle. We know that the measure of each interior angle of a regular pentagon is equal to $ 108^{\circ}$. That means that $\measuredangle{P_1BS}=54^{\circ}$, because segment $\overline{BS}$ divides an interior angle $\angle{ABC}$ of a regular pentagon into two angles both of equal measures. According to this, $\measuredangle{BSP_1}$ is equal to $36^{\circ}$. Since triangle $ABS$ is an isosceles triangle and $|P_1S|=h_a$ is a height of that triangle then $|P_1B|=\displaystyle{\frac{a}{2}}$. By knowing this, we can use trigonometry of a right angled triangle $P_1BS$: 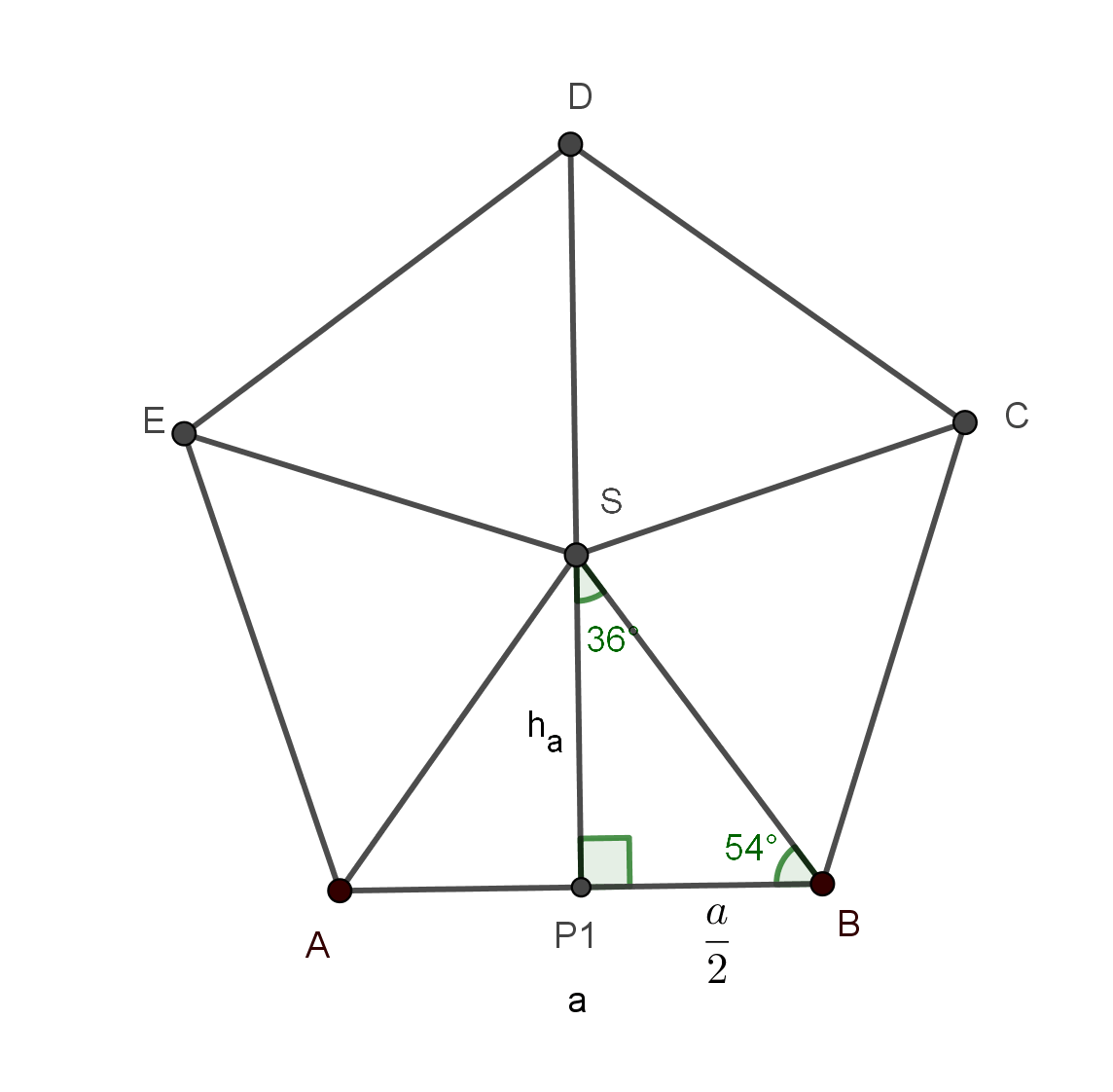 Now we can calculate the area of a regular pentagon:

A hexagon is a polygon which contains six sides. 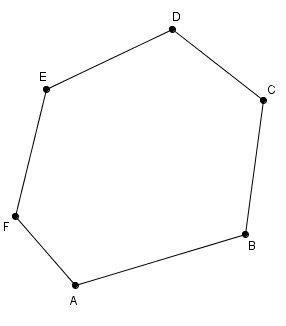 Let’s use what we know to determine other properties.

These diagonals divide a hexagon into six congruent equilateral triangles, which means that their sides are all congruent and each of their angles are $ 60^{\circ}$. For the area, we must again calculate the area of one triangle and multiply it by $6$. 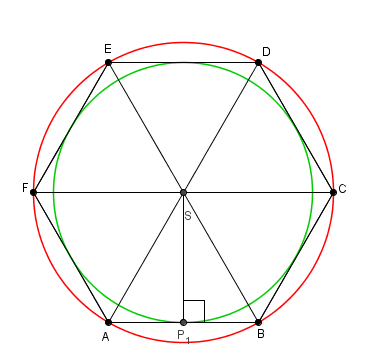 The same rules and formulas apply to other regular polygons.