How to define percents?

In this lesson we’ll be learning about percentages or percents. The word “percentage” comes from a Latin “per centrum” or one one-hundredth part. Basically the percentage is number of hundredth parts in the whole.

Let’s start with the basics.
Percentage is often denoted using a percent sign (%). Percentage is one-hundredth part of the whole. That means that

Example 1. You’re on a party with 24 other people. Let’s say you have a cake that has been divided in 25 equal parts. You notice that only 15 of those parts have strawberries. You want to calculate what percentage of people will get the strawberries.

How would you do that? You know to present this in a ratio. So let’s do that. 15 of 25 have strawberries.

So what can you do? You can expand that first fraction so that denominators match, and you numerator will be that percentage you are looking for. Let’s do that. 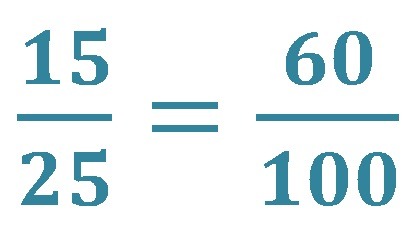 The numerator of expanded fraction is equal to 60, that means that percentage of pieces of cake with strawberries is $ 60%$.

Example 4. You bought a new bag of chips and you know that in it there are 70 chips, you ate 50% of it, and then you left it. You came back after a while and ate another 50% of it. How much chips do you have now?

The point of this example is that you have to be careful with addition of percentages. You may think that, as you ate 50% and then another 50% and that equals 100%, you have no chips left at all. But that is not true. Let’s see how can we solve this problem:

Example 5. You want to start saving for your future. You go to the bank and say you want to put 1000 dollars in your saving account. The bank tells you that every year they will add $ 0,2%$ of your total on your account. How much money will you have after 3 years?

We’ll break this problem in a few parts.
1. Let’s say a year has passed.
How much money do you have?