The order of math operations

When we perform computational actions in mathematics, we must keep in mind that there is a sequence that needs to be respected in order to do the calculation properly. Operations are divided into three degrees, and we start calculation by dealing with the third degree operations first. Because a single mathematical expression can be (but doesn’t have to be) made of different degree operations, we need to keep in mind two things:

For example, let’s try solving this problem while respecting the order of operations, and then we’ll try it the other way around to see the difference.

With respect to the order of operations:

From left to right:

As you can see, the order of operations makes quite the difference. But, what if we want the addition to be performed before multiplication? Can we do that? Well, sure we can – if we surround the appropriate part with brackets. 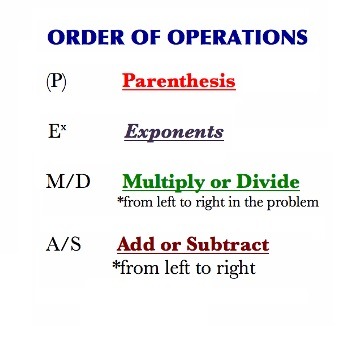 Brackets are put around the parts of mathematical expressions we want to be solved first. There are three different types of brackets: round brackets or parentheses ( ), square brackets or hard brackets or just brackets [ ], and curly brackets or braces { }.

Brackets can be put around other brackets, thus creating so called nested brackets.  Because of the existence of nested brackets, and because there are three types available, there is an order both for solving and nesting brackets.

Brackets are nested this way:

So, an expression that uses all three types of brackets could look like this:

See? Now that we know the proper order of operations, the brackets give us precise instructions on how this problem should be solved in order to get to the correct result. And in what order are brackets solved? Well, we start from the inside, by solving the problems inside round brackets first, then work our way out. Like this:

Just for fun, try solving this problem just any old way and see what different results you would get.

Well, that’s all for our lesson on the order of operations. Since this is very important and can be a bit tough to master, feel free to practice some more using the worksheets below.