Draw a graph of quadratic equations

As we spoken in last lesson, quadratic equation is a function whose formula is given in the form of quadratic expression or: $ ax^2 + bx + c = 0$

Since every function has its own special graph, so does quadratic one. Graph of every quadratic equation is a parabola. Parabola is a set of points in a plane that are all equally distant from the given line called directrix and given point focus that is not on that line.

Many aspects affect behavior of this graph so we’ll start from the simplest.

Notice how we only have the leading coefficient different from zero. And it is equal to exactly one. Since we still don’t know how this graph exactly looks we’ll start by drawing a lot of points and see where this leads us.

Now we got 9 ordered pairs of numbers we can draw on a number plane. We got something that looks like this: 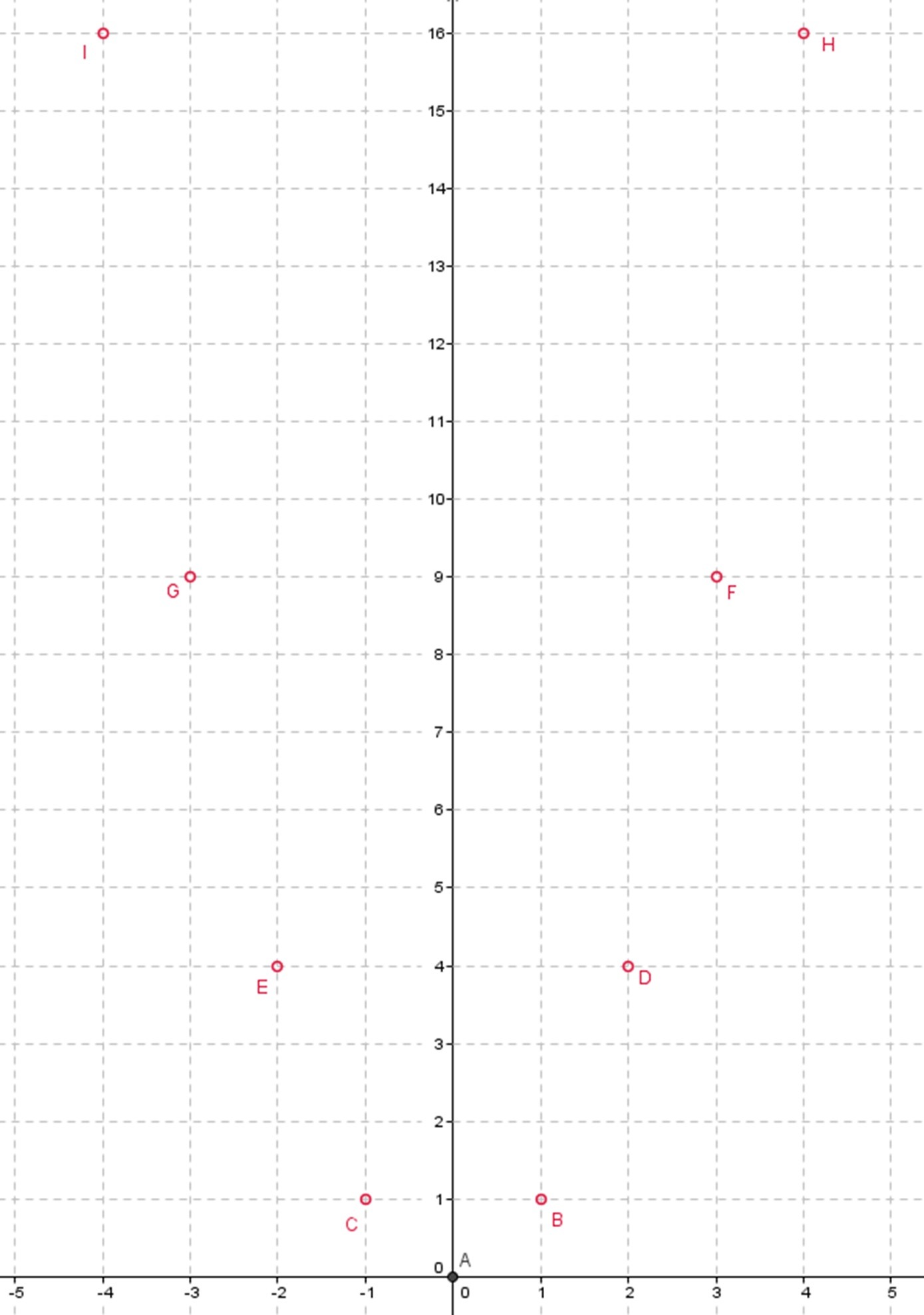 Now we have to find a curve that connects these points perfectly. If we continued the process of finding points of this graph we’d start getting a clear picture of what this should look like. 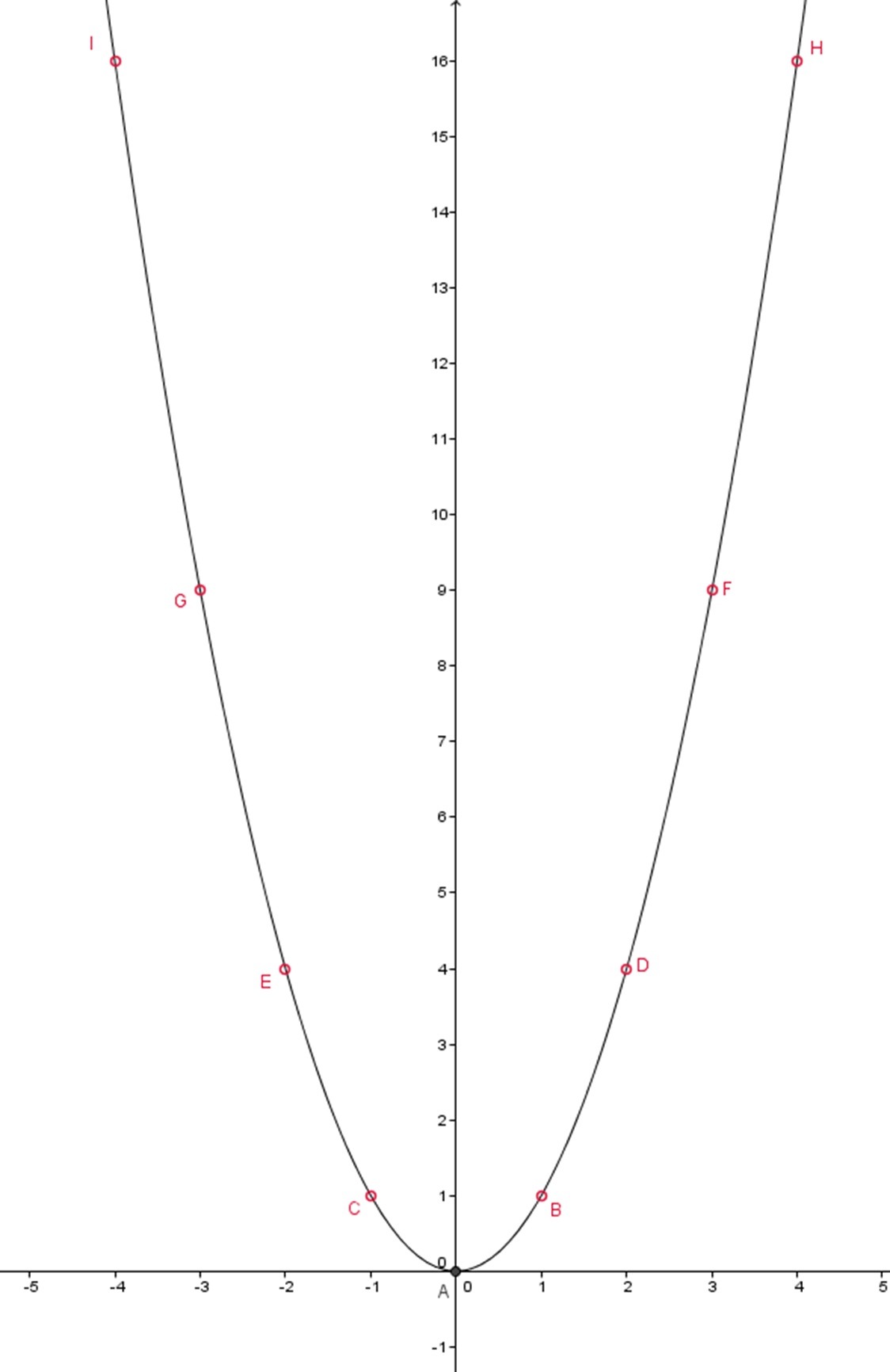 Let’s observe this graph and see what we can conclude.

This graph lies only on the positive side of y- axis and it is symmetrical in order to y- axis.

This will always be true for functions in the form of:

$\ f(x)= ax^2$
Next thing we’ll reveal is how does the function act when we’re increasing or decreasing leading coefficient.

Let’s try to draw a graph of a function 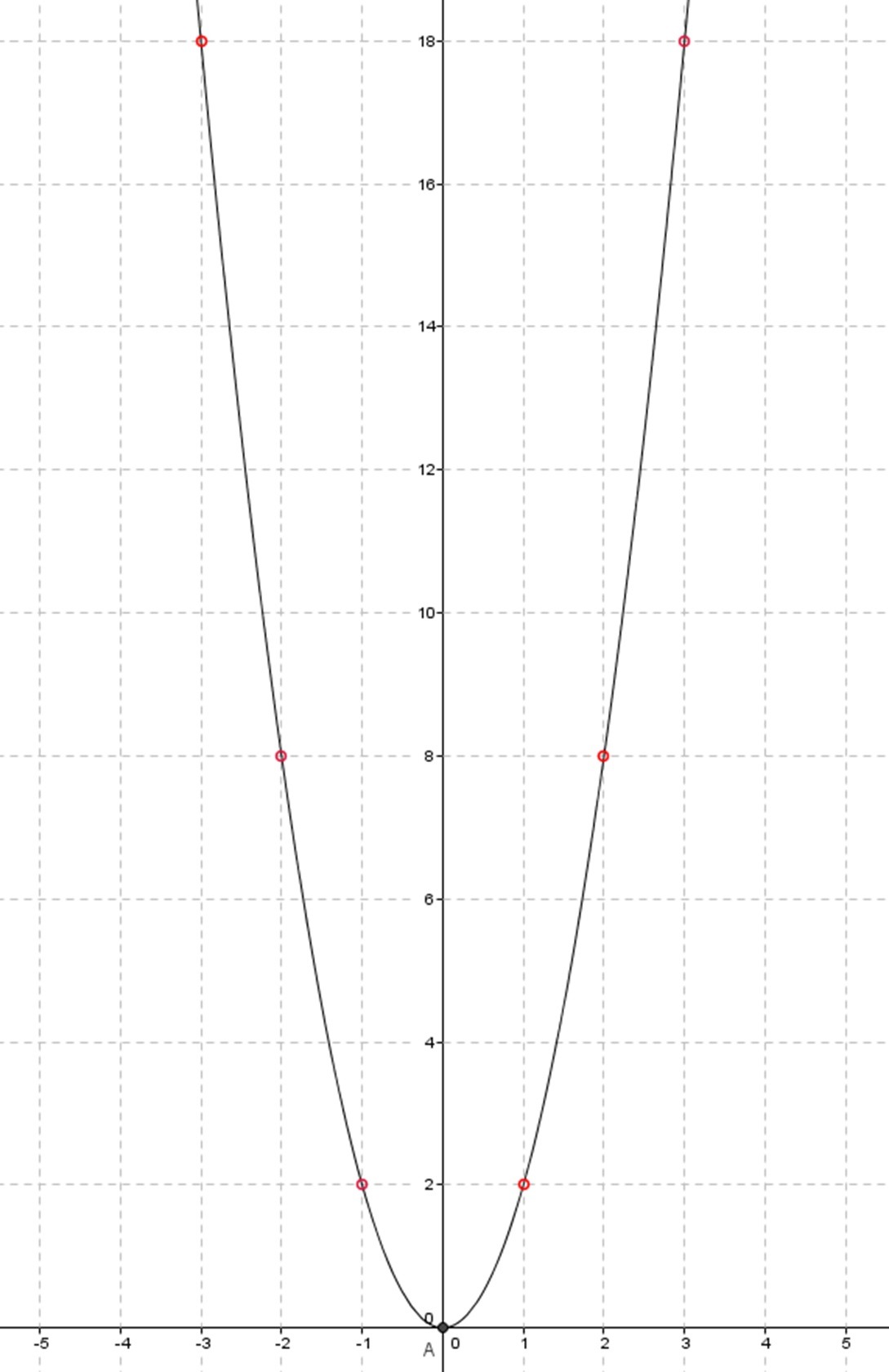 So what exactly happened? Let’s try to draw this function and function $\ f(x) = x^2$ and compare them. 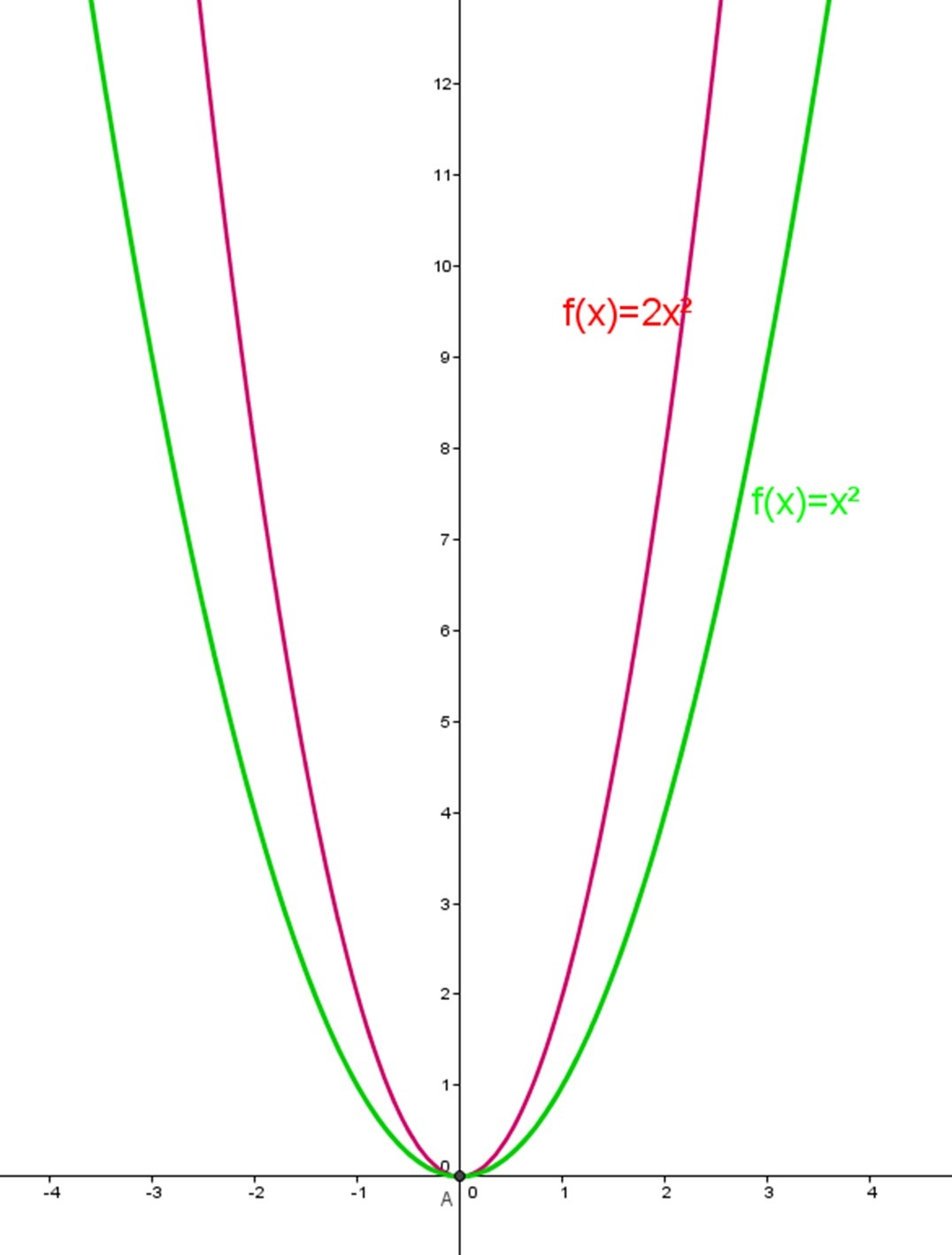 The vertex of a parabola with only leading coefficient will always be in point (0, 0).

On the other hand, if your leading coefficient is a number lesser than one (but still a positive number) your graph will look wider, because function values will grow much slower. 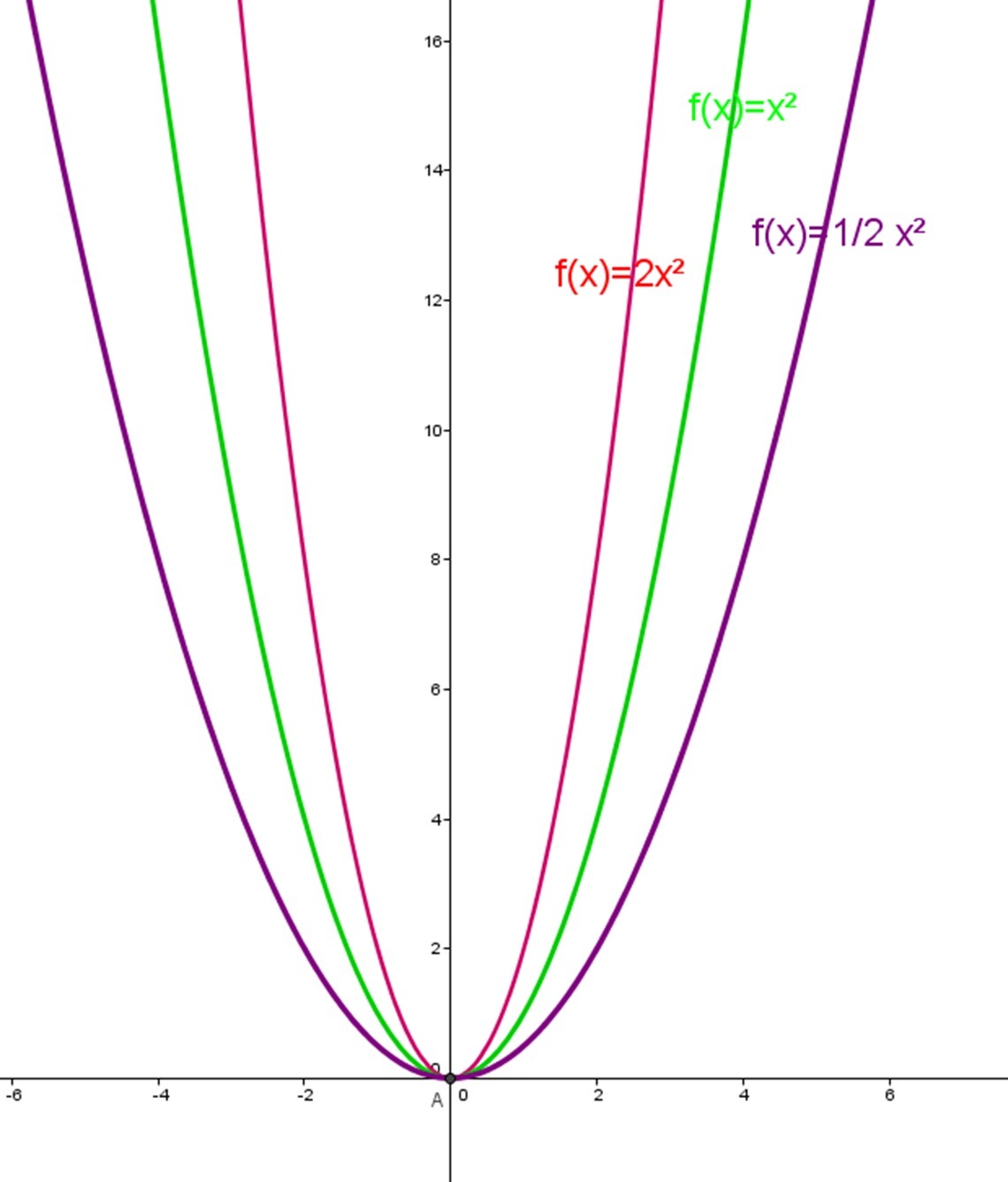 All these graphs turned around. Now all their function values are negative numbers. Note: every time you see a negative leading coefficient this will mean your parabola will be turned upside down. 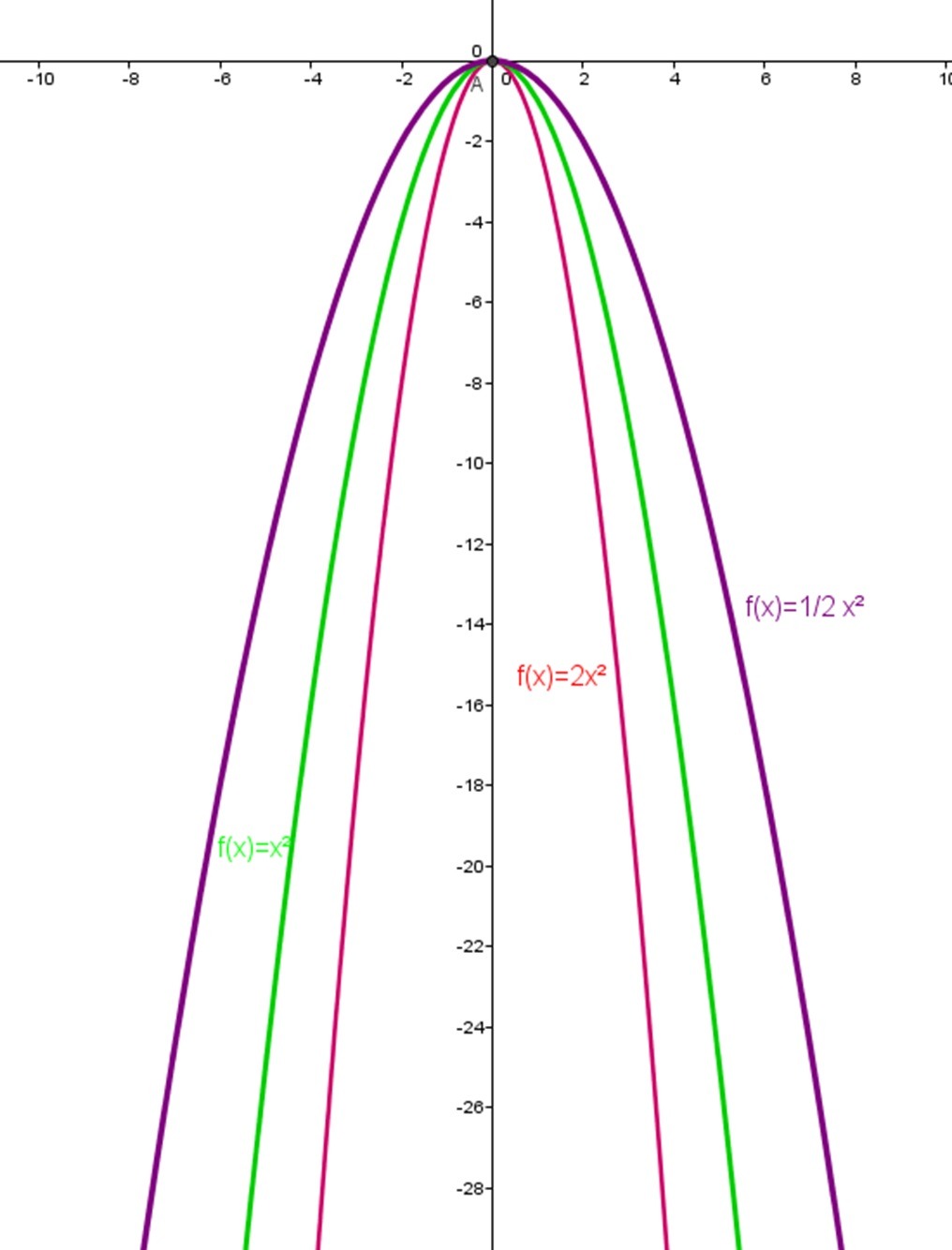 Now let’s see what happens when we include the linear coefficient.

Let’s try to draw the function 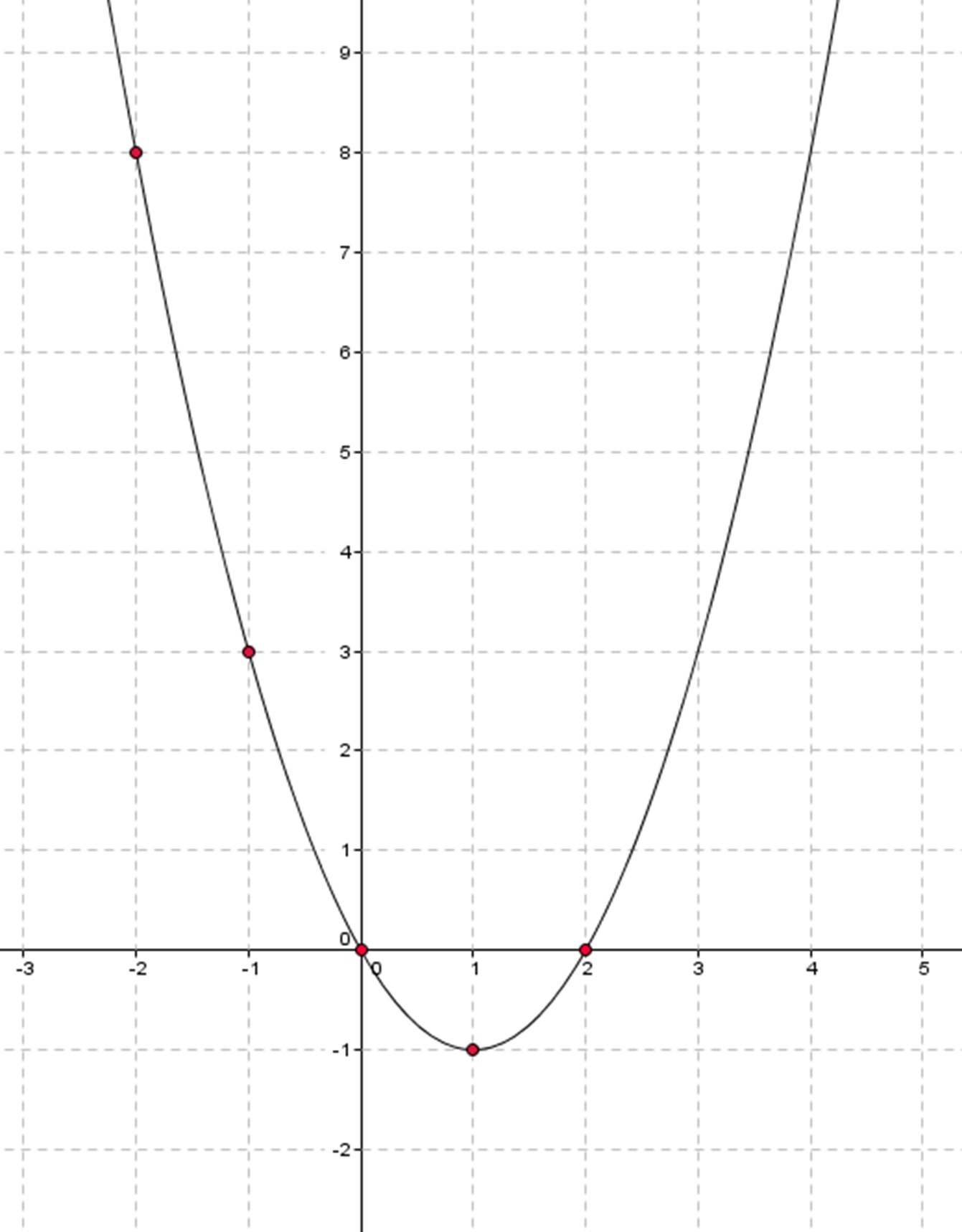 From here we can’t accurately draw our parabola because we don’t know much about it. In the first case we showed, we knew that the vertex of a parabola will be in the center and that its graph will be symmetrical according to the y – axis. Now we know that nothing of that applies to this graph.

The first thing you should do is to find the vertex. The x – coordinate of a vertex of a parabola of any kind is given with formula:

When you know x coordinate you can simply put it in the function and get your y coordinate.

Of course, this procedure is exactly the same when the coefficients change their signs.

Last thing is the function that has all non – negative coefficients. We’ll again use the formula to find its vertex and try to find it’s zeros. Let’s draw a function

Now to the zeros:

We got imaginary solutions. This will always mean that our graph does not bisect the x – axis. Since you already know your vertex, you know the line over which your graph is symmetrical. All you need is few more points you calculate and you can draw your graph. To be precise, you can also calculate where your graph will bisect the y- axis in the point where x = 0, or in our case point (0, 3). 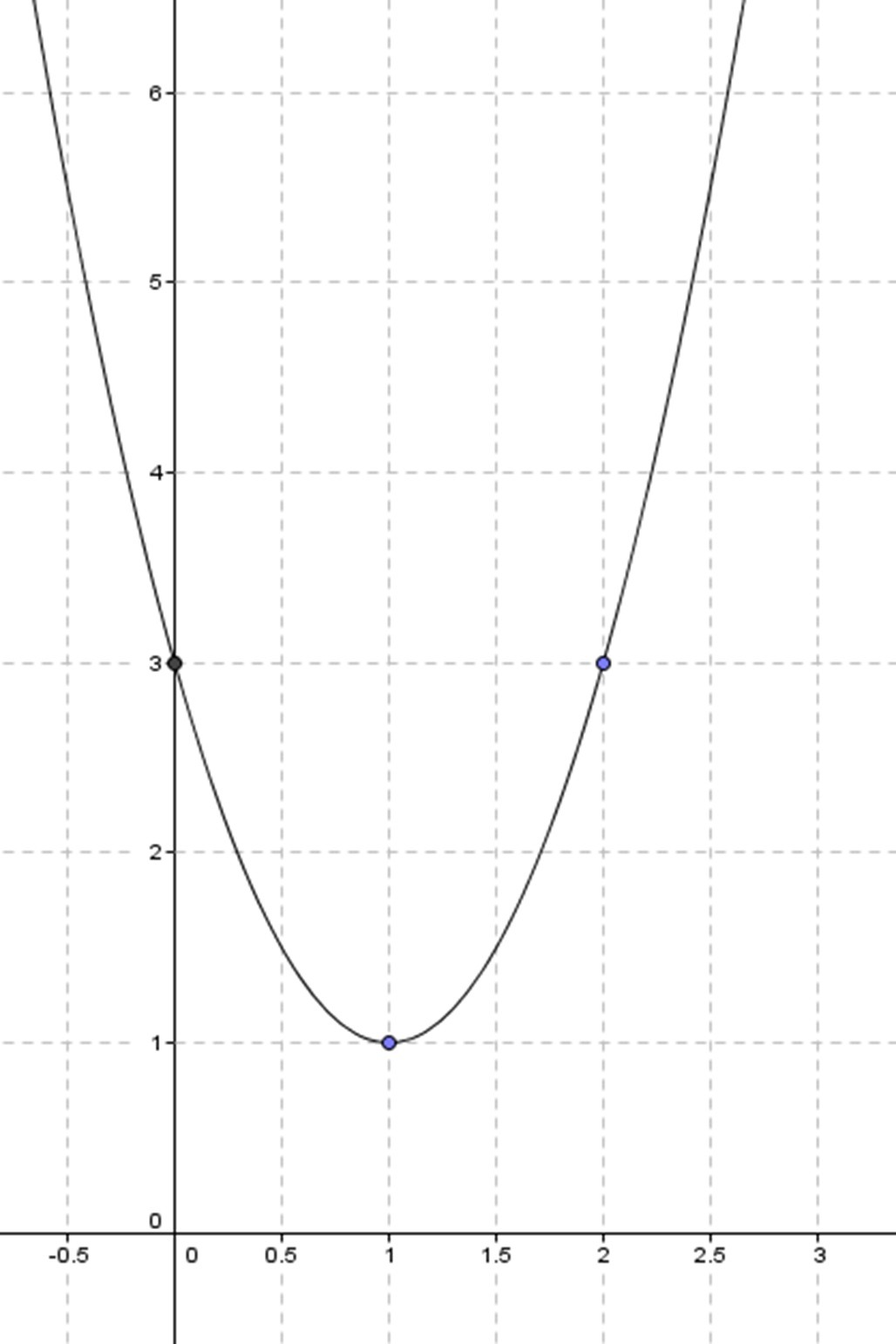 Some useful hacks for when you already get a hang of it:

You can draw all of these graphs using minimum calculations if you learn how this graph translates. 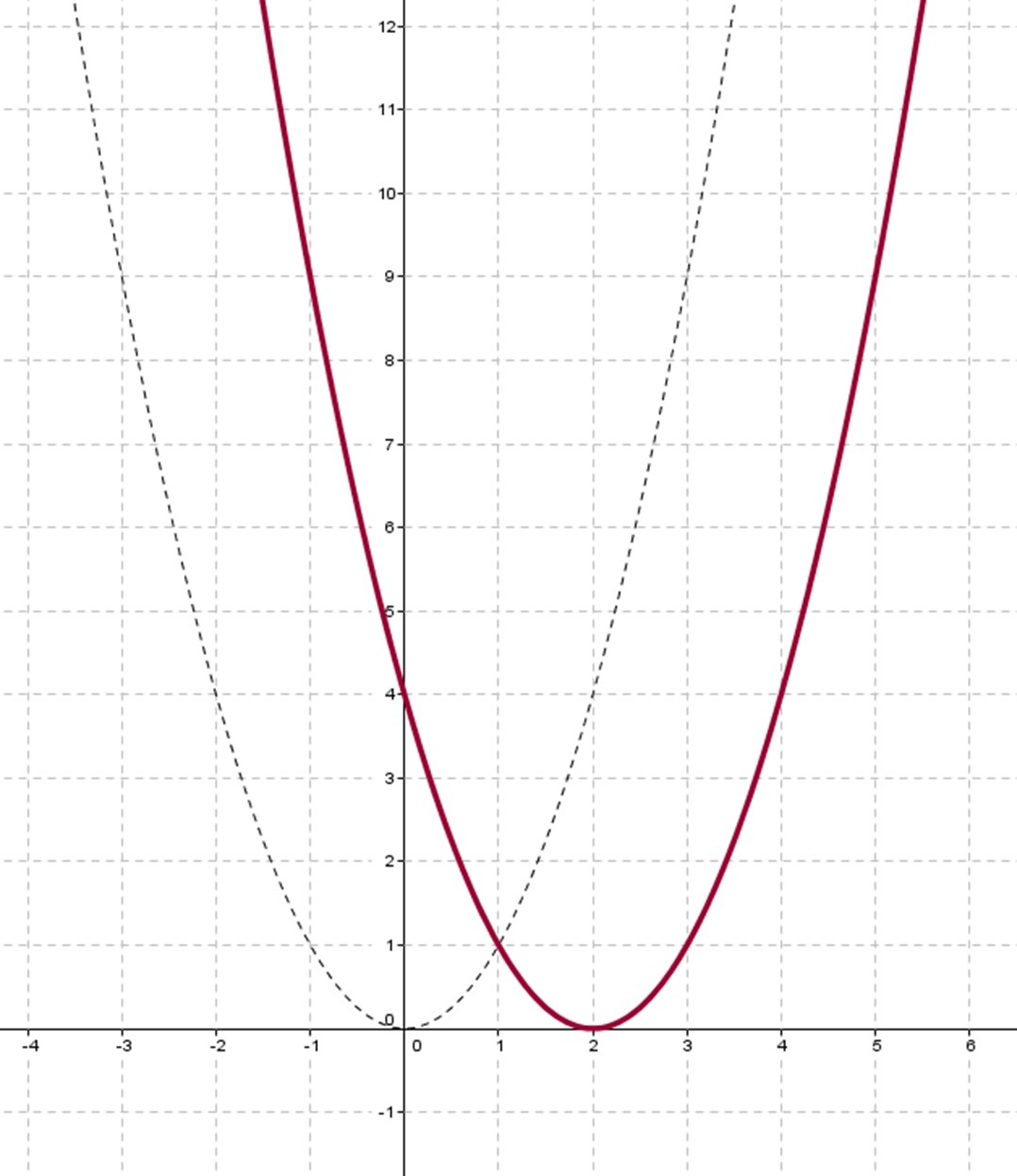 Every graph you draw is some kind of a combination of these two, which means that you can, by completing the square, draw all of these graphs without really calculating anything. 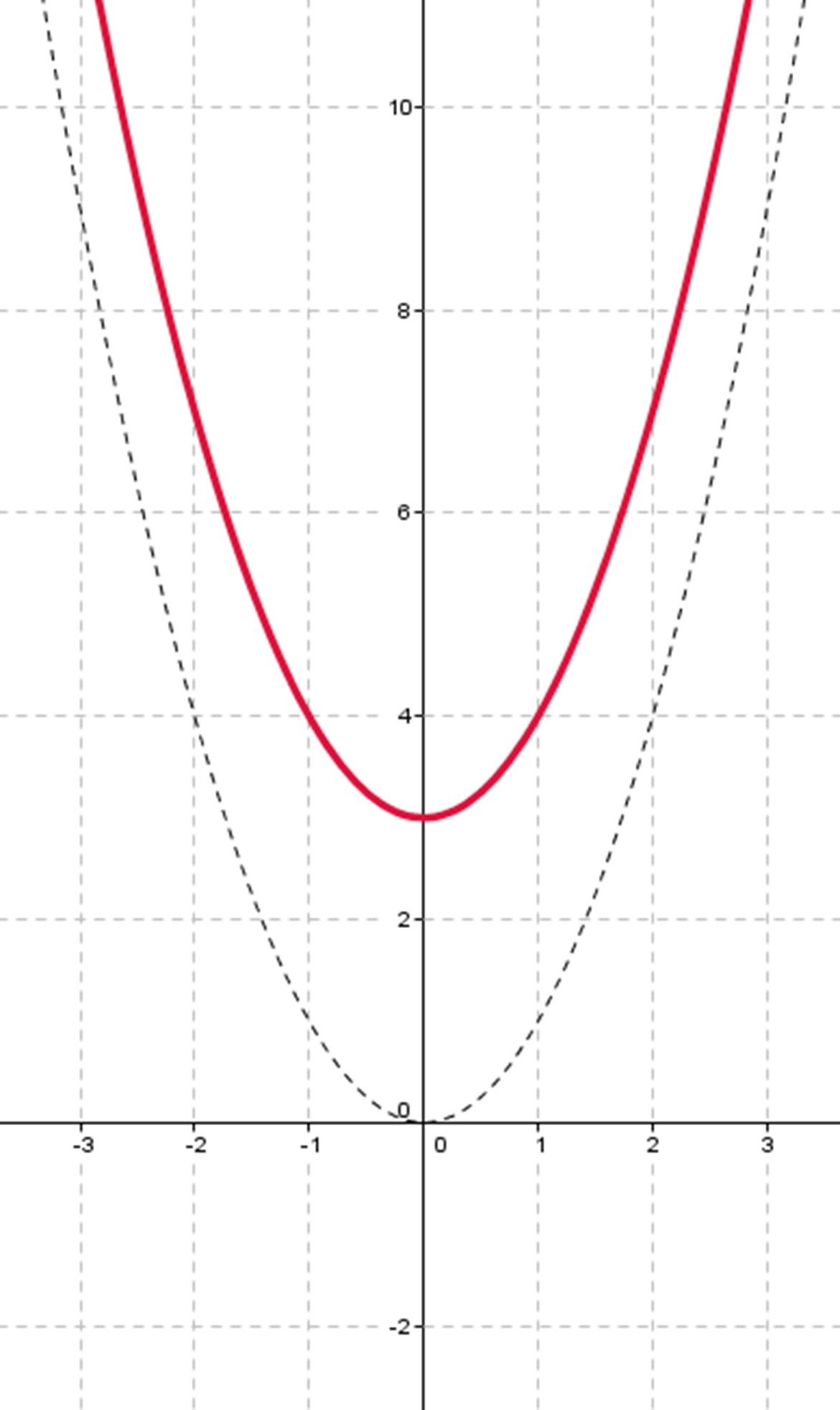 For example if you want to draw a graph 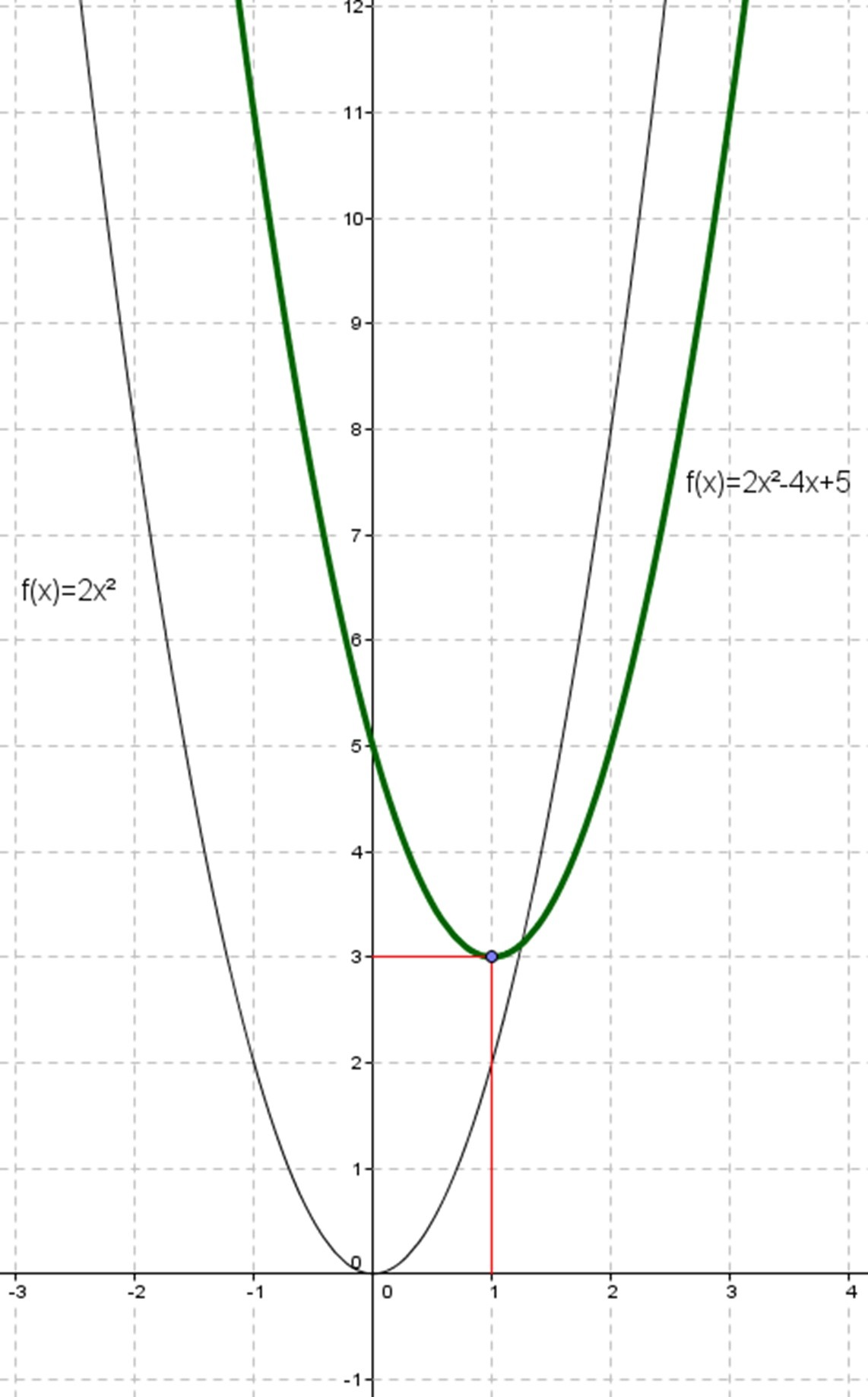