We encounter the term ‘frequency’ in everyday situations. For instance, think about your school or college days and situations when the professor gave you your exam score. Students often ask themselves: ”How many of my colleagues got the same score?”. In other words, they ask themselves what is the frequency of the score.

Precisely, the definition is:

We say that number $p_{i}= \frac{f_{i}}{N}$ is a relative frequency or proportion, where $N$ is a number of elements of population. 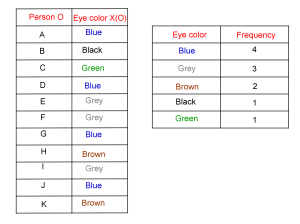 Example 3:   $40$ people were asked what kind of chocolate they like most:

Therefore, the relative frequencies are:

Finally, a relative frequency table is:

Here is an example of a cumulative frequency.

Example 4:  Suppose you sort your social network friends in several groups by their age: under $18$, $18 – 25$, $25 – 35$ and so on. Furthermore, frequencies for each group are given. Let’s say you want to know how many of your friends are under the age of $25$. In other words, you simply need to sum the frequencies of the first two groups.