Addition and subtraction of decimal numbers

Now we will learn what decimal numbers are, let’s learn how to use them in basic arithmetic operations.

First in line are addition and subtraction of decimals.

So, the basic principles behind the addition of real numbers are pretty much the same as the ones with the whole numbers. And the decimal point actually doesn’t make as much of a difference as we might think. Let’s take a look at this example:

As in any other addition, we start by adding the rightmost numerals of both numbers, and keep going from right to left. If the sum of two added numerals adds up to more than ten, we will just increase the sum of the first numerals to the left by one. We can add as many zeroes as we want behind the rightmost numeral of our number. That’s basically the same thing as adding zeroes in front of the leftmost numeral to the left of the decimal point – it won’t change the value of the number at all, but it will make calculations easier. 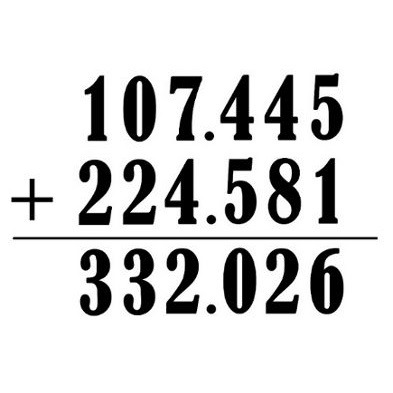 After that, we just write down the results of our additions to their appropriate places. Therefore, the final result of our addition is decimal number $2.971$.

Subtraction works in a similar fashion. The biggest difference is that, instead of “remembering the $1$”, we “borrow the $1$”.

Well, that’s it for the addition and subtraction of decimal numbers. If you would like to practice a bit more and get a better hang of it, try solving the examples from the worksheets below.