Now we will explain mutual conversion of decimals, fractions and percents meaning that every number you know can be converted into three basic form. We use this in special cases, when one form is more convenient then another or when you are given a task where you have different form of numbers.
First we’ll show you how to convert fractions into decimals.
Let’s say you have a fraction $\frac{1}{4}$. Thing about what exactly this is. Fraction line represents division. When you divide number $1$ with $4$ you get $0.25$ which is one fourth of $1$ which is equal to $\frac{1}{4}$. 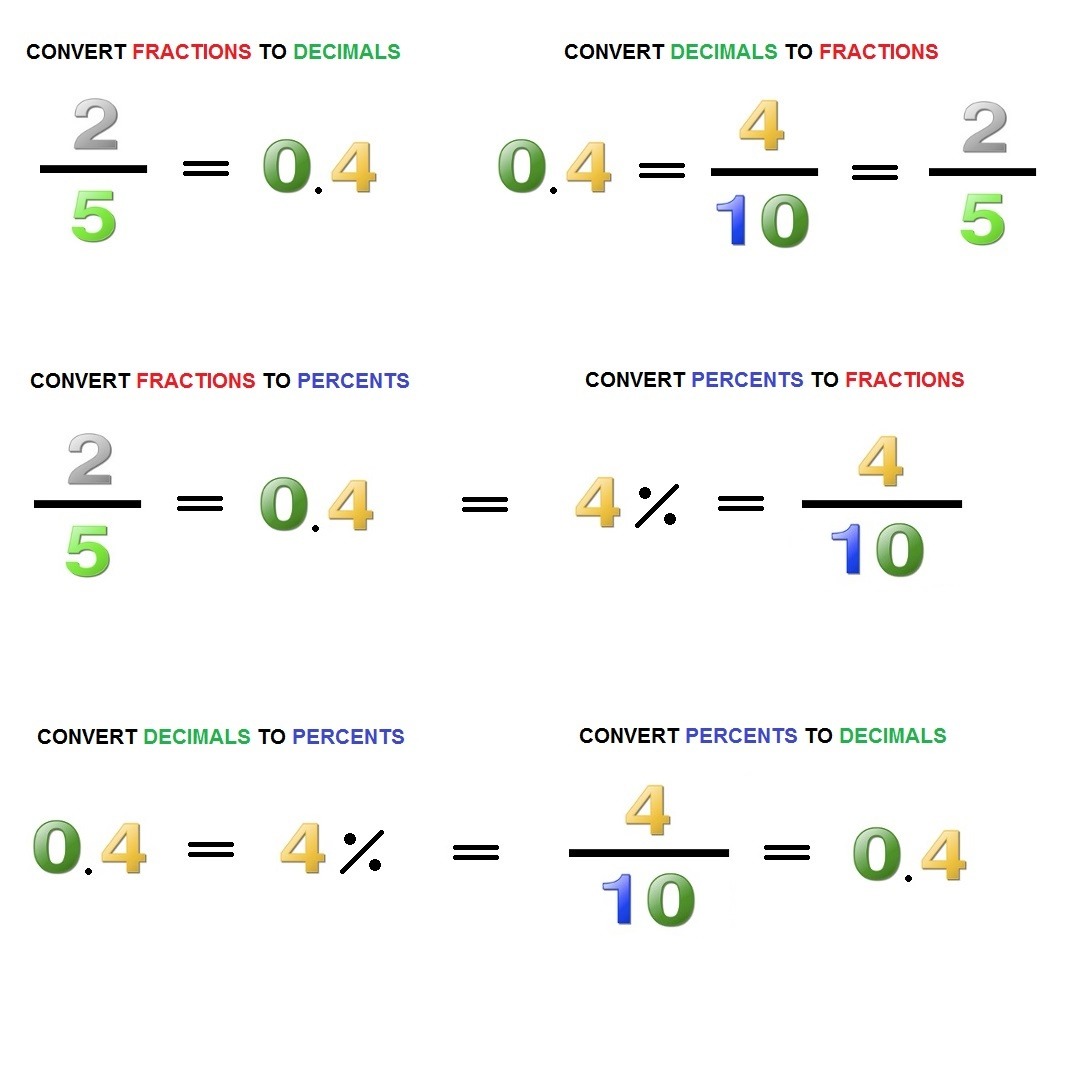 This means that whenever we have a fraction we can convert it into a decimal with simple division of numerator with denominator.

Take the first example. If you have a decimal $0.4$ and you want to turn it into a fraction you’ll first look at the number of decimals.  The numerator of that fraction will be all decimals behind the decimal point, in this case $4$.

When we shorten the fraction we made, we should get that converted number.

There are two decimal places which means that the denominator will be $ 10^{2} = 100$, and the numerator all numbers behind the decimal point which means $52$.

You can always check by trying to convert this fraction back to its decimal form:

Percentage is a ratio that can be represented as a fraction with denominator $100$. Term “per cent” really means one in a hundred.

Think about what that means. Numbers behind decimal point represent how many parts of a whole that number has. This is exactly what percentages mean.

This means that when converting a decimal into a percentage you should simply multiply that decimal with $100$.

Converting a percentage into a decimal is just contrary.

When you have only percentages to transform into a decimal you should simply transform % into a fraction $\frac{1}{100}$. You can also think of it as taking the number in front of the percentage sign and dividing it by 100.

Of course, this is the process you can do with fractions as well. A fraction is also a real number, so the process of conversion into a percentage is the same.

For the conversion of fraction into a percentage you simply divide a fraction with $100$, and then shorten the fraction.

Convert a fraction into a percentage.

Since percentage sign can be written as a fraction $\frac{1}{100}$, conversion of percentage into a fraction can be seen as simple multiplication of two fractions.

This means that, when converting a percentage into a fraction you simply multiply the number in front of the percentage sign with $100$ and then shorten the fraction.

Convert a percentage $42 %$ into a fraction.