We know that a regular polygon is a polygon that has all sides of equal length and all interior angles of equal measure. In this lesson we’ll learn how to construct them using compass and a ruler.

Example. Construct a triangle if we know the length of the side $a$.

First we create a sketch. It doesn’t have to be accurate, but it will give us an idea from where to start. 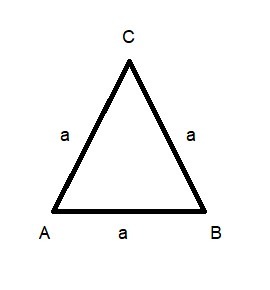 Lets draw a ray with endpoint $A$, which will be the first vertex of the triangle. We take the ruler and set the compass width to the length of a given side $a$. Then, put the compass’ needle in the point $A$ and make an arc. Make sure that the arc intersects with the previously drawn ray. The point of intersection of the arc and ray is our second vertex, $B$. Without changing the width of the compass, we repeat the previous step. The only difference is that we put the compass’ needle on the point $B$ and make the arc that intersects with the first one. We can see that arcs intersect in two points, giving us two last vertices, $C$ and $C’$. We now have two triangles, $\bigtriangleup ABC$ and $\bigtriangleup ABC’$. Triangles are congruent because of the SSS theorem, so we say we only have one solution. 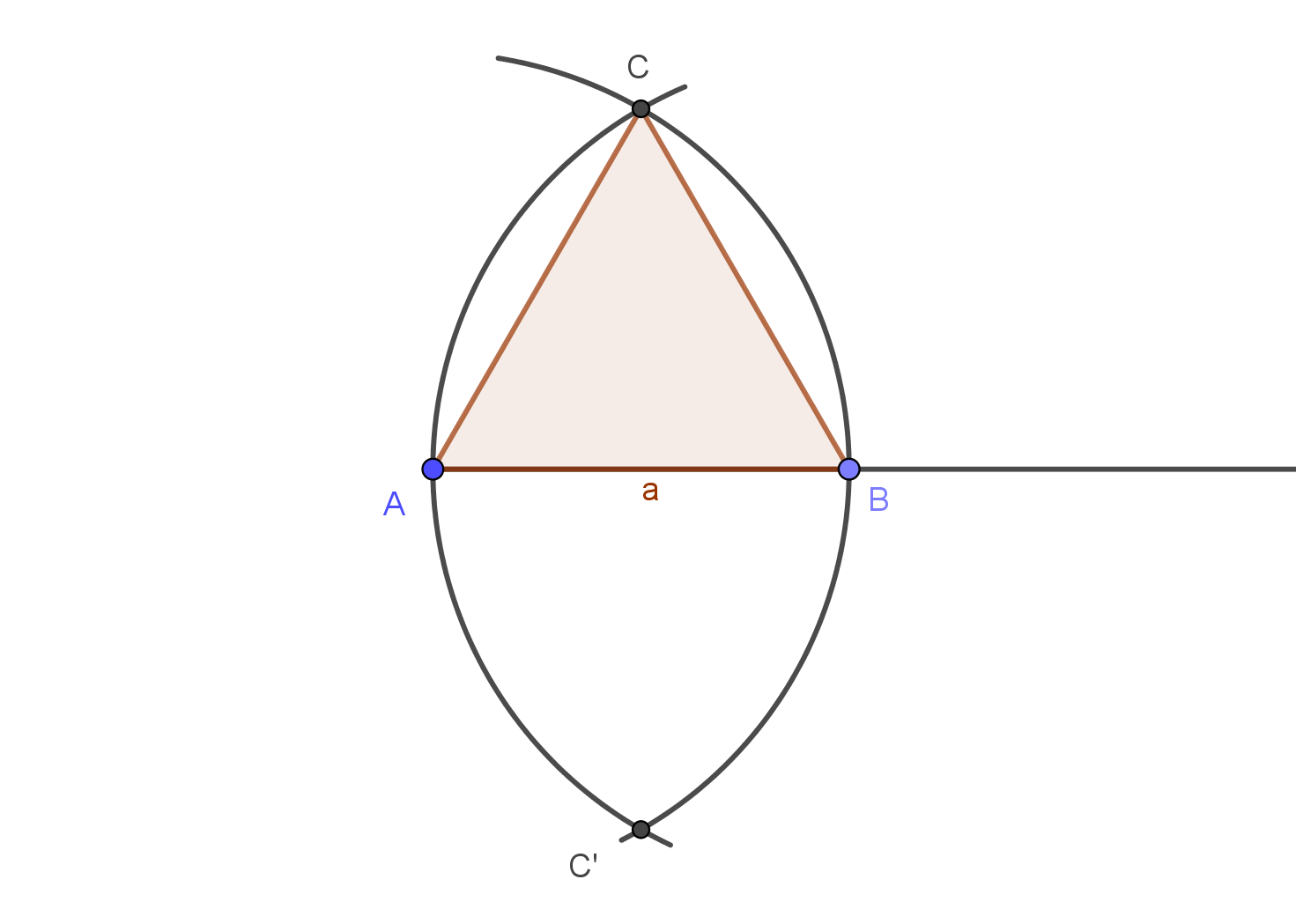 We used a ray to get points $A$ and $B$, but if we used a line, we’d get one more vertex $B’$ on the other side of $A$. By following the steps described above, we would get two more triangles, four in total. All four of them are congruent, and we see them as one solution to the problem. 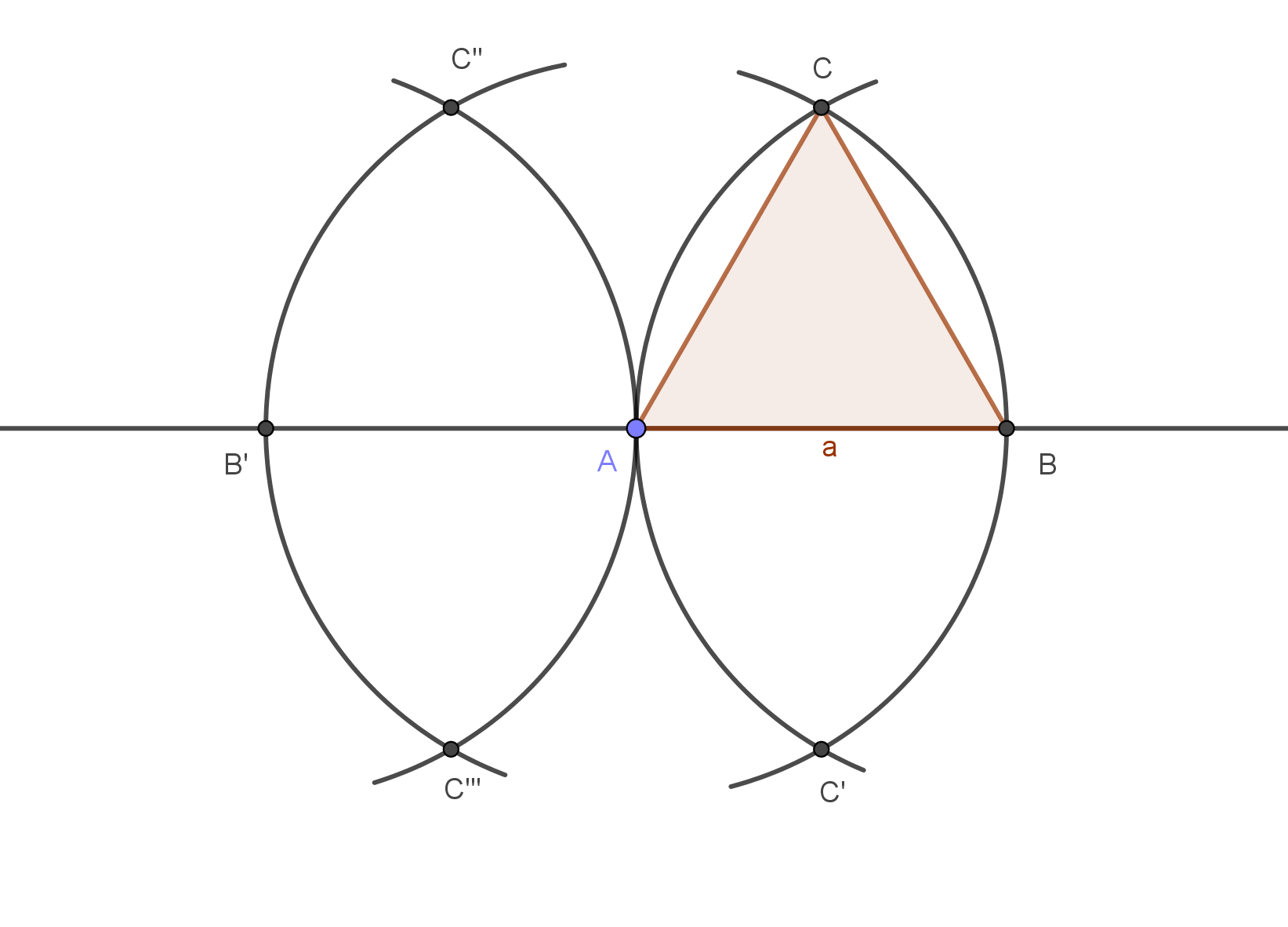 Example. Construct a triangle if we know the radius of the circumscribed circle. 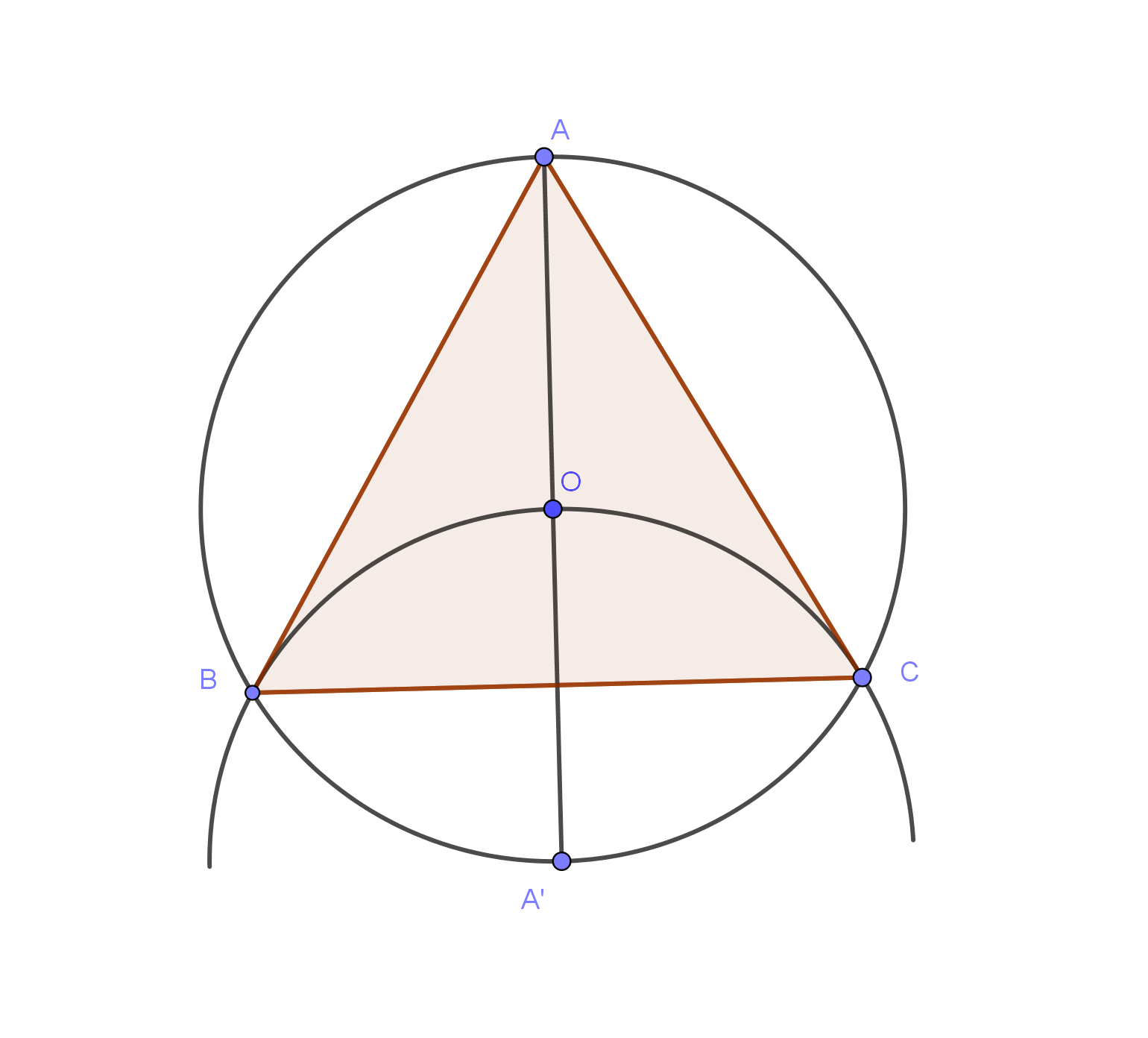 Example. Construct a  square if we know the side $a$.

First, we make a sketch to know the disposition of the points and sides. 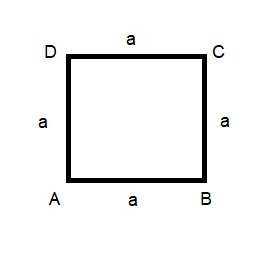 We will start by creating a line and a point $A$. Then we take the length of the side $a$ in the width of the compass and make an arc that intersects with the line we drew first. The intersection is point $B$, our second vertex. Now we need to construct a line that’s perpendicular to the $AB$, with the $B$ being the point of intersection. We do this because we want to create the angle $\measuredangle ABC = 90^{\circ}$.

Now we have a perpenticular line, and we know the vertex $C$ will be on it. Take the length of the side $a$ in the width of the compass and make an arc that intersects with the perpendicular line – the intersection is our vertex $C$. What’s left is constructing the vertex $D$. We do that by creating two arcs of the circles $c(A,a)$ and $c(C,a)$. Their intersection is the final vertex, vertex $D$. 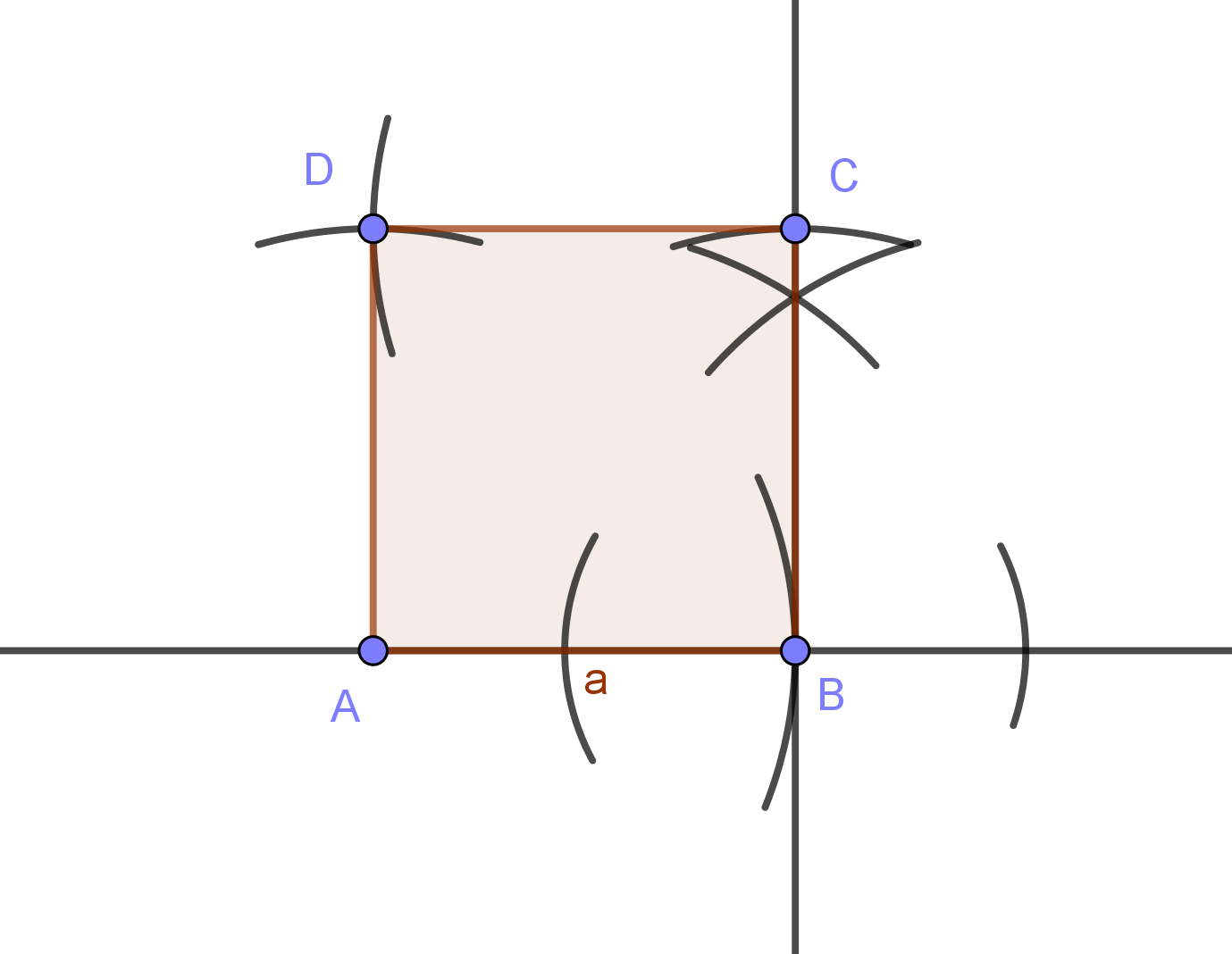 * We only constructed one square here, but we could have constructed four of them by following the same process we did in construction of equilateral triangle.

Example. How to construct a square if we know the radius of it’s circumcircle? 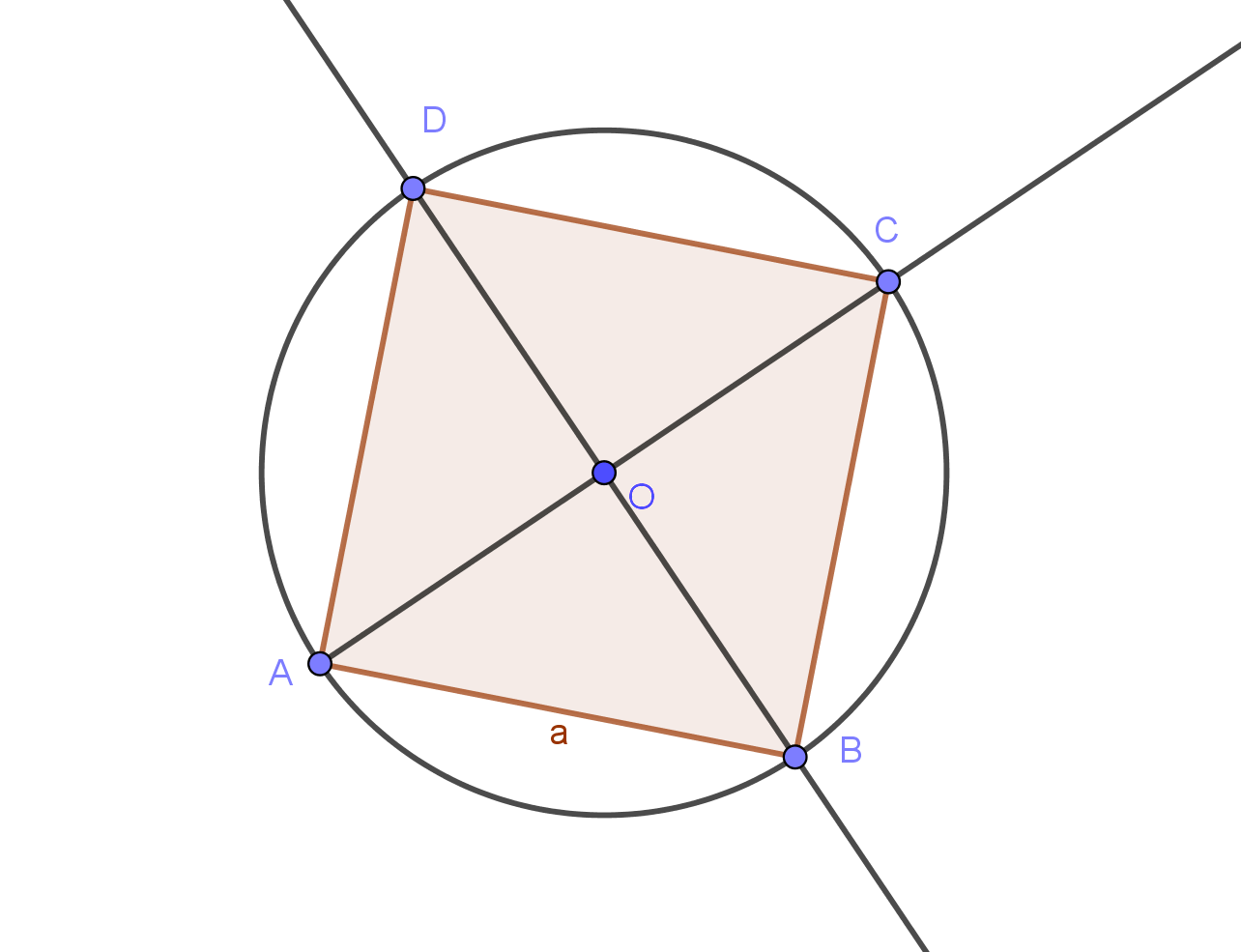 First we draw a sketch by hand. It doesn’t have to be perfect since it’s not our final construction, we’ll just use it for planing. 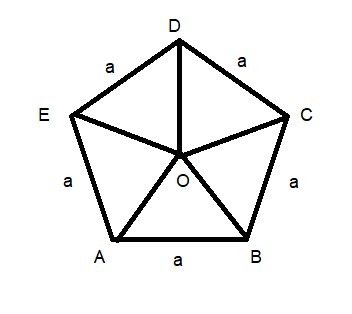 Example. Construct a regular pentagon if we know the side $a$.

Make a ray with $B$ being its endpoint and then construct point $A$ so that $|AB|=a$. We want to create a bisector of $|AB|$. Take the compass and make sure the width of compass is the length of side $a$ (IMPORTANT!). Put the needle on $B$ and make two arcs of the circle $c(B, a)$. Repeat the step for arcs of $c(A,a)$. The arcs intersect in points $K$ and $L$. Join them to get the midpoint between $A$ and $B$, point $M$. Again, keep the compass radius the length of $a$, put the compass’ needle on $M$ and make an arc that intersects with bisector line, making the point $N$. Now, adjust the compass to the length of $AN$. Put the needle in $A$ and make an arc that intersects with the ray we made at the beginning, that will give us a point $P$. 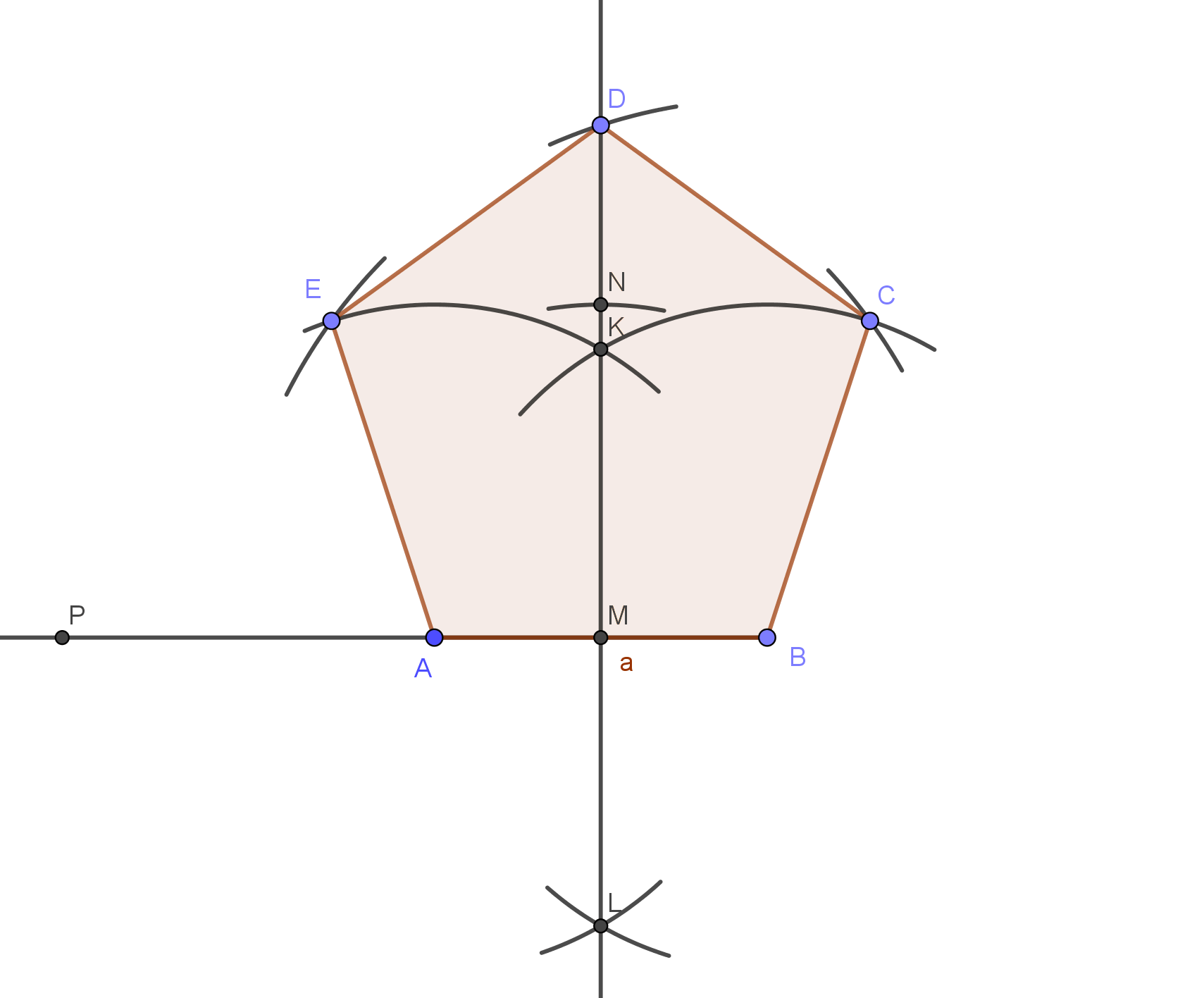 Example. Construct a regular pentagon if we know the radius of the circumscribed circle.

The distance from $A$ to $N$ is the length of the side $a$ of regular pentagon. Now that we know the length of $a$, we need to construct vertices. Let $D$ be our first vertex.

Firstly, we open the compass to the length of $a$ and put the needle of compass on $A$. Now make an arc that intersects with the circle $c(O,r|)$ giving us the vertex $B$. Without changing the width of compass, we put the needle on $B$ and do the same process to get vertex $A$, and so on. This process will give us the remaining $4$ vertices. 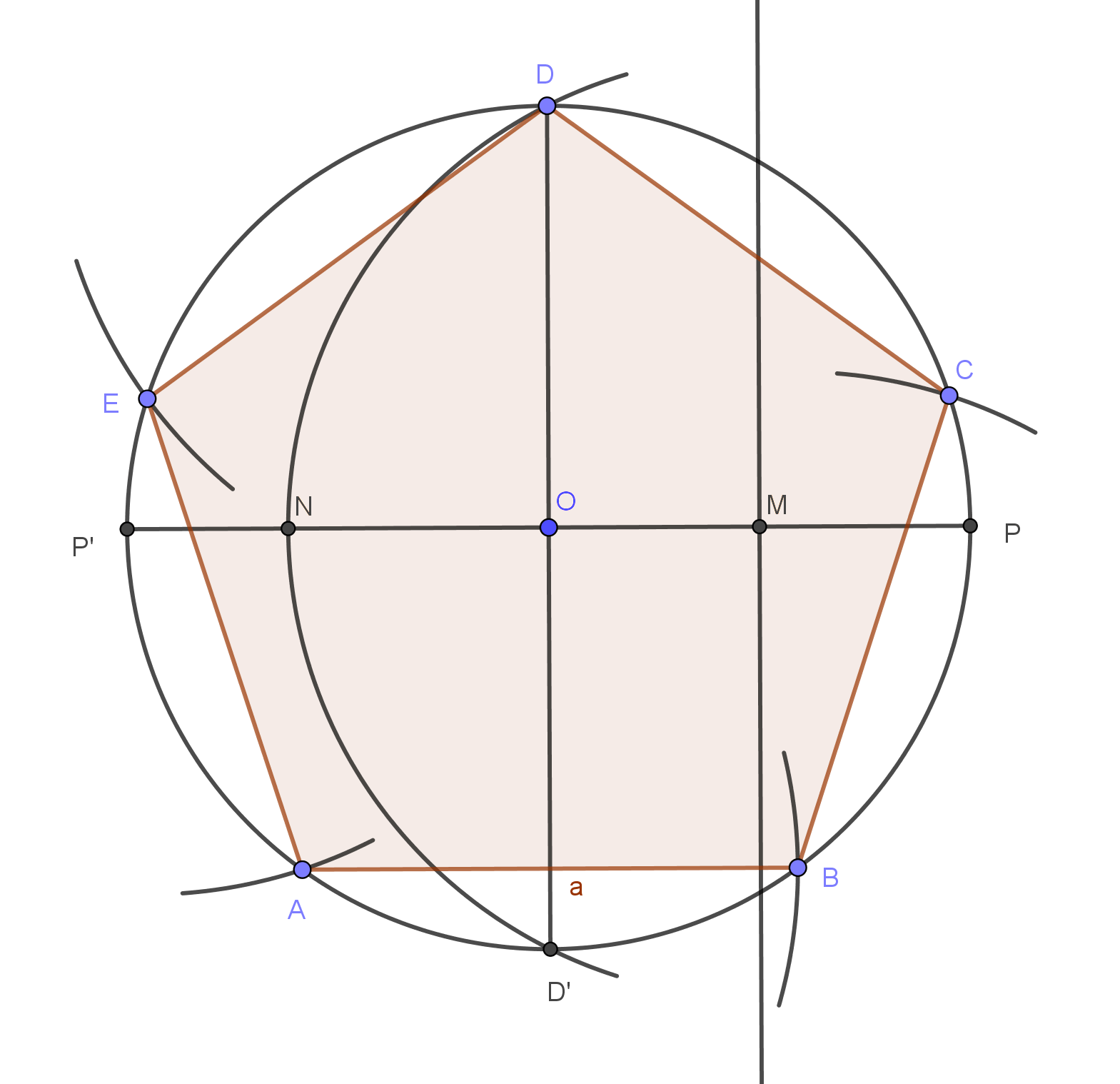 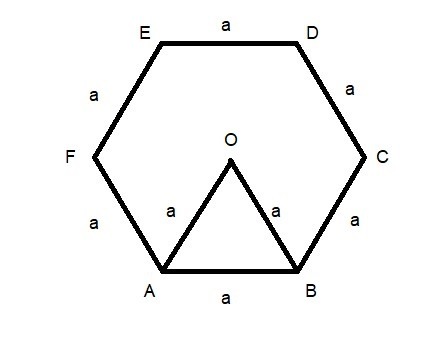 Example. Construct a regular hexagon if we know side $a$.

We can break regular hexagon into $6$ equilateral triangles with the side $a$. The vertex $O$ is the center of inscribed and circumscribed circles, and $|AO|=|BO|=|CO|=|DO|=|EO|=|FO|$. First we construct $\bigtriangleup ABO$ following the proces we used in constructing equilateral triangle. Let’s draw $c(O, |AO|)$. Since $O$ is the center of circumscribed circle, we know that hexagon’s vertices will be on the circle. Now we just take the length of $a$ into the width of a compass and make $4$ arcs on the circle.

Without changing the width of compass we put the needle of compass on the $B$, make and arc that intersects with the circle $c(O, |AO|)$ giving us the vertex $C$. Then we put the needle on $C$ and do the same process to get vertex $D$, and so on. This process will give us the last $4$ vertices. It doesn’t matter if we start from $A$, and do it clockwise or from $B$ like we did here, the result will be the same. 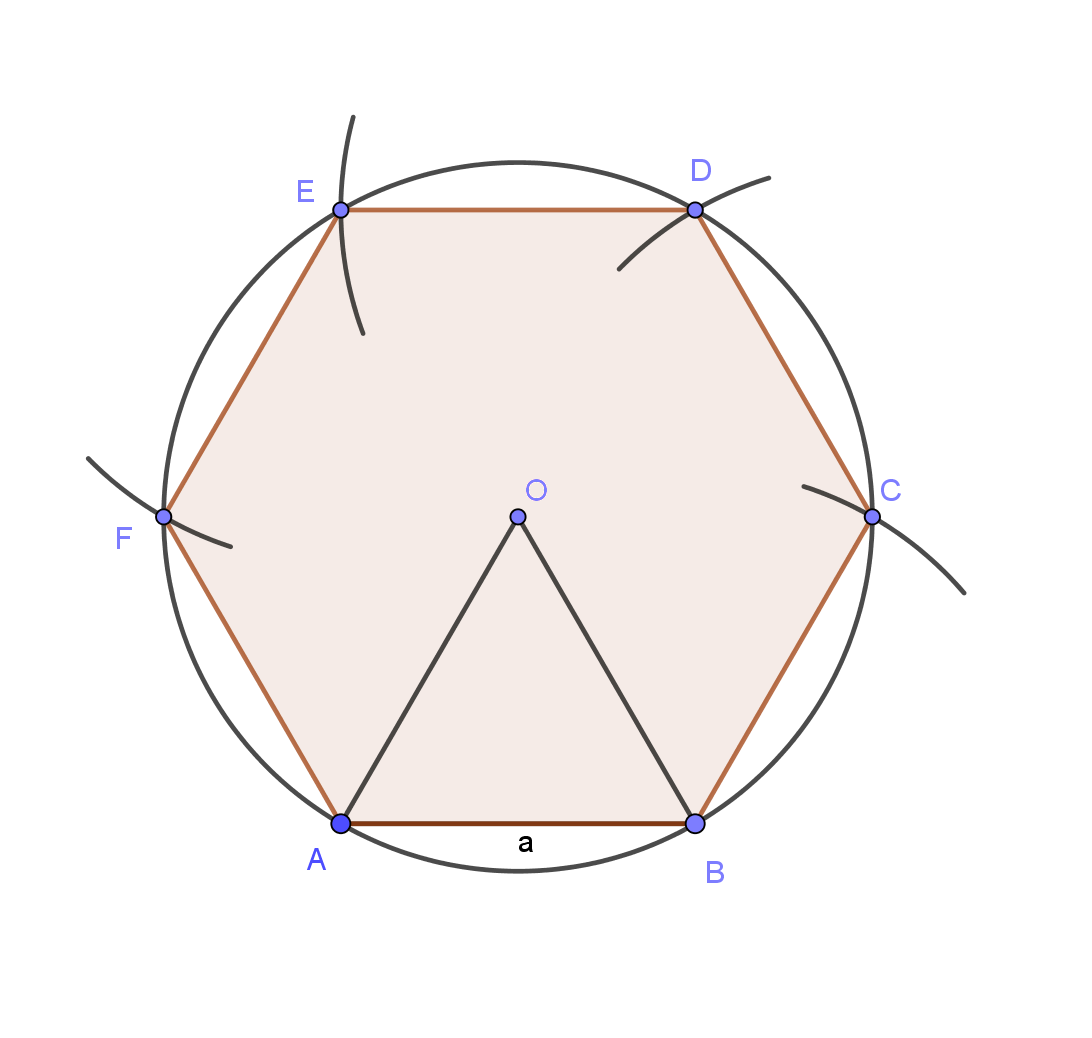 Important to remember:  In regular hexagon $\bigtriangleup ABO$ is equilateral triangle, which means that the length of a radius of circumscribed circle and the length of a side are always equal.

Example. Construct a regular hexagon if we know the radius of circumscribed circle.

This is even easier. We just draw the circle $c(O, r)$ and pick a starting point on it, let it be point $A$. In regular hexagon, we know that the radius of circumscribed circle is equal to side of polygon, meaning $r=|AO|=|AB|$.  Now that we have the side of a regular hexagon, we construct the remaining $5$ vertices like we did in the last example. 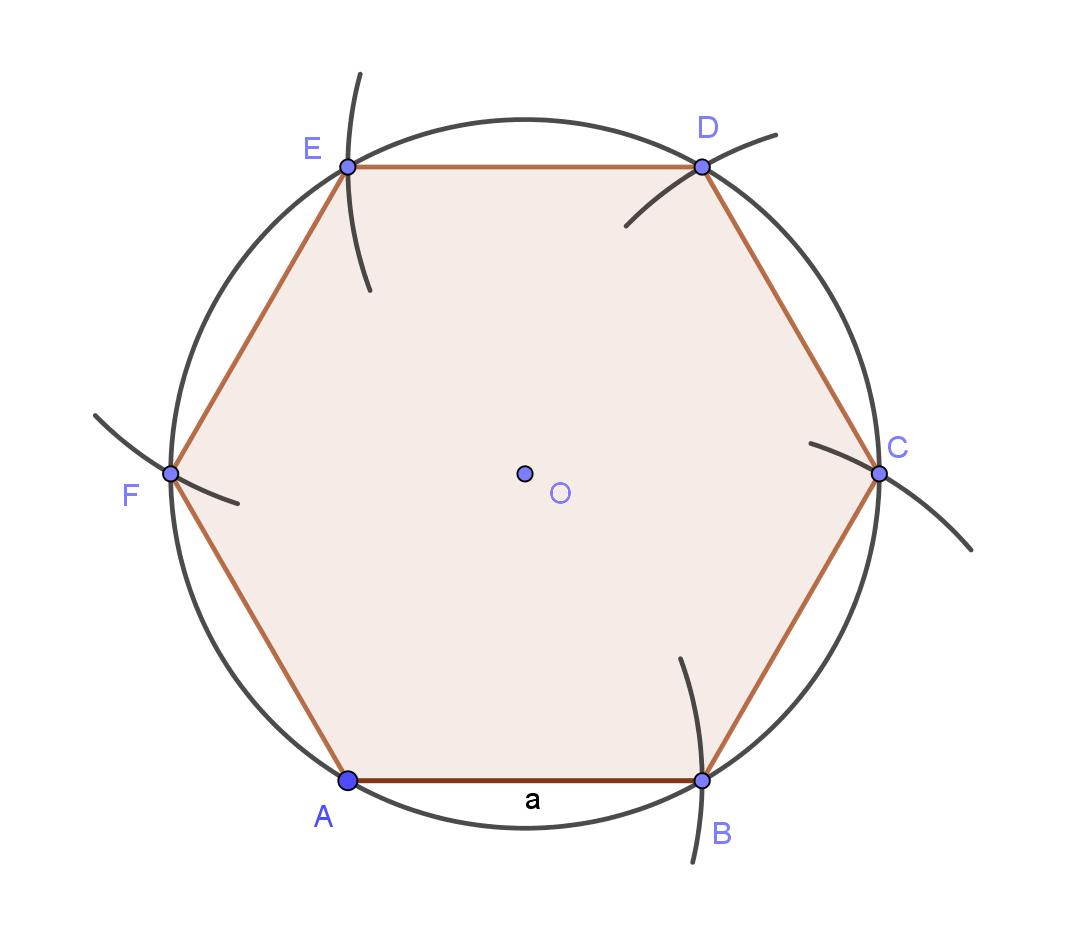 Example. How to construct a regular octagon if we know radius of circumscribed circle? 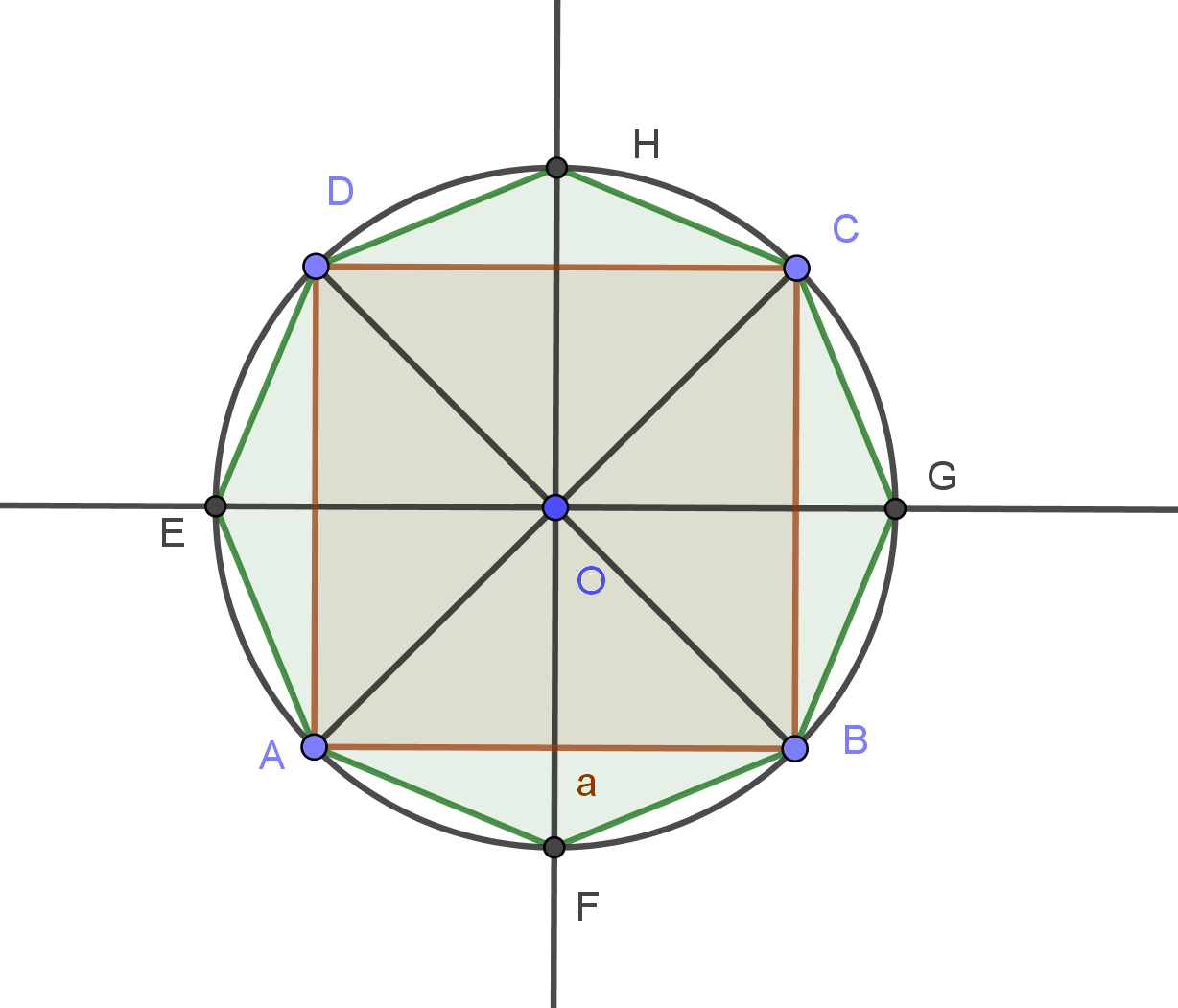 Example. How to construct a regular decagon if we know radius of circumscribed circle?

Bisectors intersect with the circumscribed circles giving us $5$ new points,  $F, G, H, I$ and $J$. Those points are the remaining vertices of an decagon. 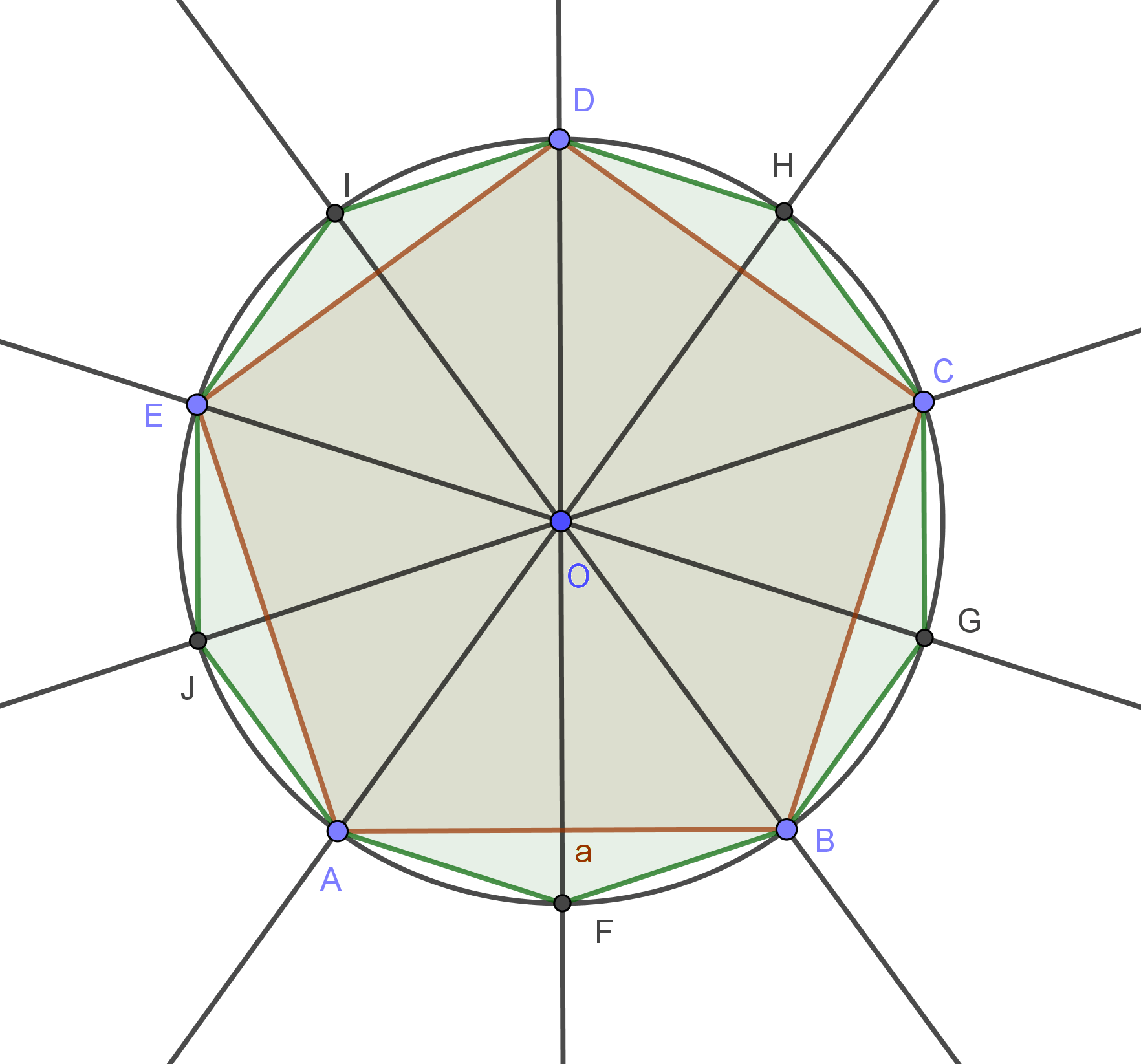 Example. How to construct a regular dodecagon if we know radius of circumscribed circle?

Just like we did in the last two examples, we can construct regular dodecagon out of a regular hexagon. Angle bisectors of central angles of a hexagon give us remaining vertices of dodecagon. 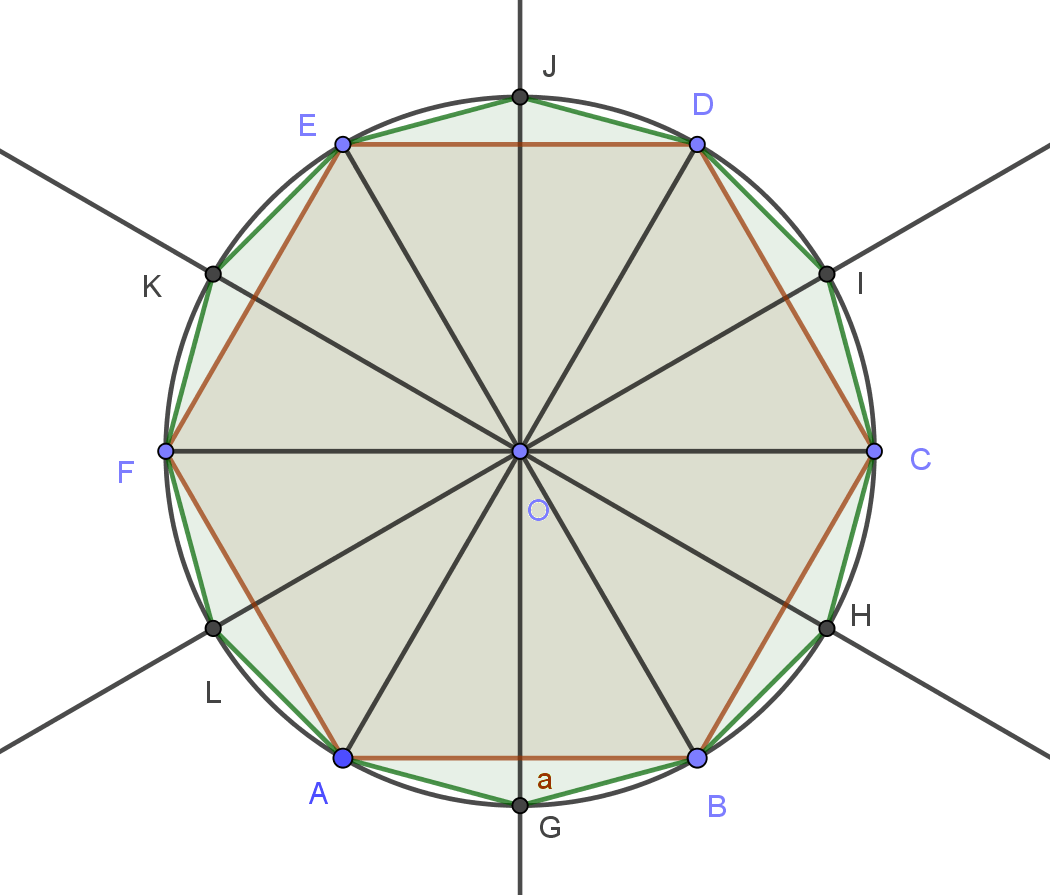