Let’s say that some college professor wants to see how was the score of his students. What would he do? Obviously, it’ll be too complicated to read the scores from all the students. Instead of this, he would probably find the average score.

The arithmetic mean is just an another name for the mean or the average. It is preferably to call it ‘arithmetic mean’ instead of simply ‘mean’ because in math there are several means; for example, there are geometric mean and harmonic mean.

If numeric variable is given with statistical sequence $y_{1}, \cdots, y_{N}$, then its arithmetic mean is obviously

Therefore, finding an arithmetic mean simply means that we have to sum all the numbers up and then divide that sum by the number of elements in our set.

Example 2: The distribution of number of days by number of absent employees of some company is given:

The arithmetic mean of numeric variable which joins to every employee the number of days of absence is:

Example 3: The distance (in kilometres) from place of residence to work location of employees of some company is given: 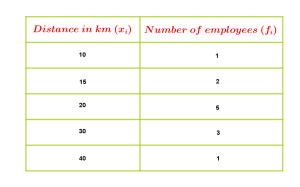 Example 4: Find the average traffic data for shops if you have the following informations: 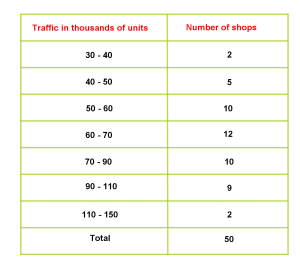 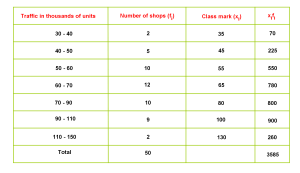 Geometric interpretation of the arithmetic mean

The first step in geometric construction of the arithmetic mean of numbers $x$ and $y$ is to draw a semicircle with diameter of length $x + y$.

Next step is to draw a perpendicular to the diameter from the midpoint of the line segment of length $x + y$.

Finally, the arithmetic mean of $x$ and $y$ is the length of the perpendicular from the semicircle to the diameter. 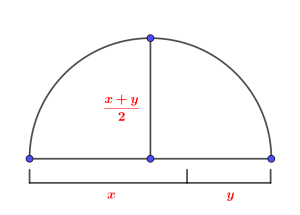