The history of behind it

Although counting can be thought of as a form of addition, the earliest discovered artifacts suggest addition has been used between 20.000 and 18.000 years BC. The first written evidence though, indicates that Egyptians and Babylonians were using it as early as 2.000 BC. Due to the complexity of the numeral systems in use in that time, performing basic mathematical operations was also a complicated task. With the development of positional numeral systems, especially the Hindu-Arabic system, and the use of a digit representing zero, enabled the use of simpler methods of calculation, like the ones we use in modern times.

Addition displays several distinct properties, such as commutativity and associativity, as well as having an identity element. The identity element is defined as the element in a set of numbers that, when used in a mathematical operation with another number, leaves that number unchanged. In the case of addition, that element is the number 0 (zero). That means that when you add zero to another number, you get that same number as the result.

It is also worth mentioning that if you wish to add physical quantities with units (such as square feet, yards, meters, pounds, kilograms etc.), they first have to be expressed with common units. In other words, add meters to meters and not to square meters or kilograms.

Addition is considered commutative, which means that you can exchange places of the terms without changing the result.

Associativity is the property of addition that comes into play when more than two numbers are being added and it tells us that the order of operations is not important when we are adding more than two numbers. That means it doesn’t matter whether you’re going to add the third and fourth number first or the first and second – the result will not change.

In our next example we are going to look at addition of 3 three-digit numbers: 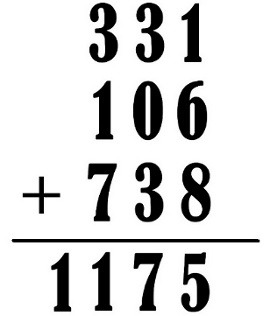