Rules for the addition and subtraction of integers

1. A minus in front of a number changes the sign of the number.

To get a grasp of this rule, we’ll call a couple of old friends to our aid – the number line and the multiplication of natural numbers. Remember how multiplying a number by the number 1 gives you that same number as a result? Well, putting a minus in front of a number is shorthand for multiplying that number by -1. The distance from the origin point on the number line stays the same, but the minus shifts it to the opposite side of the number line. 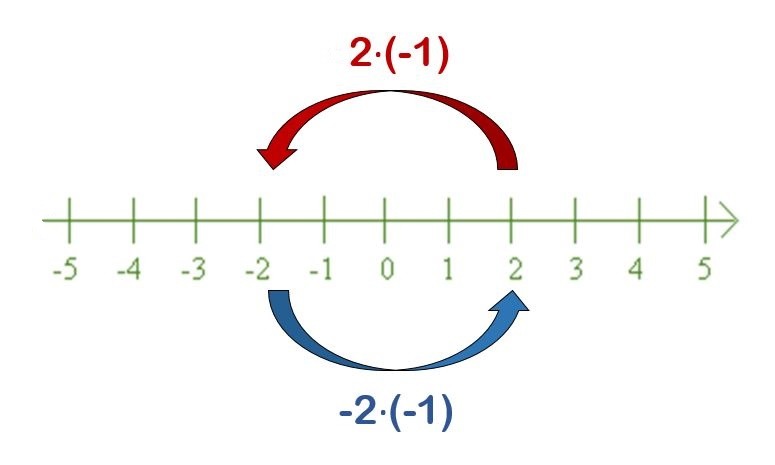 2. If a negative integer is behind an operator, it has to be surrounded by parentheses.

This one is here to avoid confusion, because the minus sign is also the operator for subtraction. If we put two operators next to each other, it is unclear if:

To make things easier, a rule has been created to put negative integers into brackets (parentheses). That way, everybody knows that the minus is there on purpose and that it is a sign.

Although mistakes can be avoided during addition and subtraction by using rule number one, this rule will be indispensable during multiplication.

So, what happens if the subtrahend (second number) is larger than the minuend (first number)? When it turns into a positive integer, we will move past the point of origin and get a positive integer as a result.

Again, rule number one – the minus in front of a positive integer changes its sign. When it does, we’re basically adding two negative integers together, and we covered that in rule number two.

6. Adding a negative integer to a positive integer is basically the same process as the subtraction of two natural numbers.

Understanding these rules helps us to solve practical problems. Now we know how to solve the problem from the previous lesson. Let’s repeat the problem:

Now we know that the temperature in the evening was -3.6°F.

If you want to practice a bit more, we prepared some worksheets for you. You can download them using the links below.

Addition and subtraction of integers worksheets