Euclid of Alexandria was a Greek mathematician. He was called the “Father of Geometry”. He wrote one of the most influential works in the history of mathematics – Elements.

Although Elements are mostly about geometry, Elements also include number theory. In this lesson we’ll give a little insight of this great mathematicians mind and his influence in the number theory. 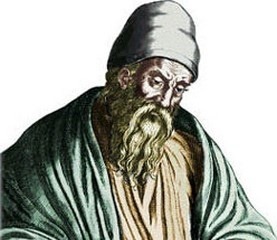 The Euclidean Algorithm is a method for finding the greatest common divisor of two integers. Before showing the exact algorithm first we should set few rules and notations.

If a|b and a|c, we say that a is the common divisor of numbers b and c.

Let’s assume that with repeated application of the remainder theorem we got the following string of equalities:

Lemma 1 implies that the greatest common divisor of a and b is equal to rn because:

This process for finding GCD is called the Euclidean algorithm.

Let’s see how this algorithm works in practice.